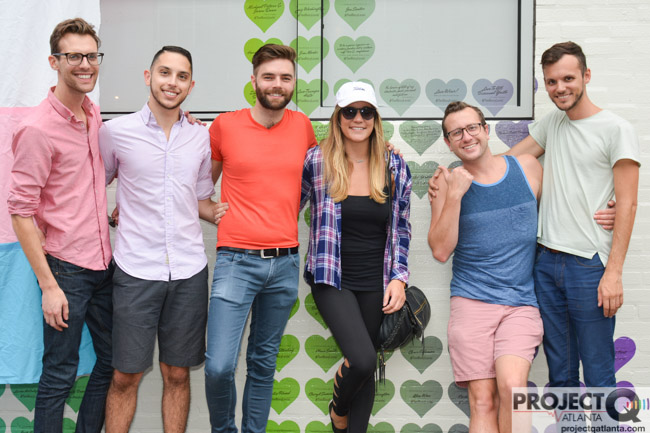 LGBTQ Atlantans spread some rainbow love on the wall of a Midtown restaurant as part of an installation to show that Atlanta is #StillTooBusyToHate.

The project – which includes 342 hearts – was to call attention to violence targeting trans people and more than 100 local activists, as well as commemorate attorney Trinh Huynh, who was murdered on a Midtown street in April, and the victims of the Las Vegas massacre on Oct. 1.

The project from Rainbros was installed on the side of 10th & Piedmont on the restaurant's wall that fronts 10th Street and unveiled during a ceremony on Saturday. The installation will remain in place through March 2018. It sits just a few feet from the intersection of 10th Street and Piedmont Avenue where the city installed rainbow crosswalks earlier this year.

Some $11,389 in donations was pledged through an online fundraising campaign. Rainbros estimated the project cost at about $8,605, though a sizable portion of that – $5,000 – was paid for with an in-kind donation from gay-owned Prima Printing. Keylay Design also donated in-kind services to the project.

Rainbros organized a Midtown rally in July to support transgender people and hosted a forum for Atlanta mayoral candidates in August.