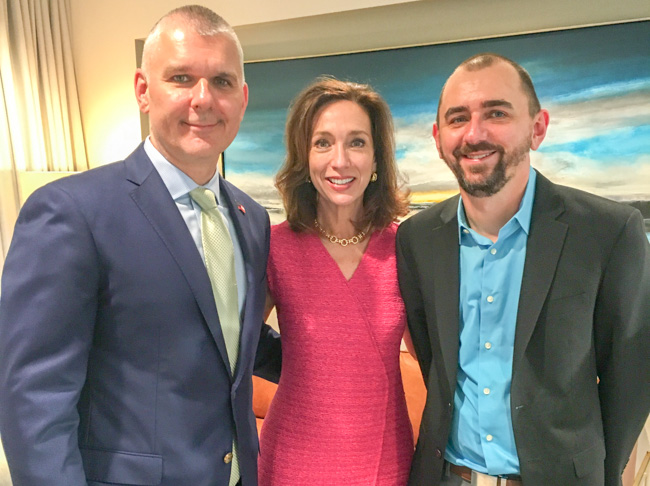 Teresa Tomlinson’s race to unseat David Perdue in the U.S. Senate got a boost from several LGBTQ donors at a Midtown Atlanta fundraiser.

The Sept. 18 event raised over $10,000 for Tomlinson, according to co-host Dennis Collard. Tomlinson (photo center), the former Columbus mayor, is one of four candidates running in the Democratic primary for the chance to face Perdue in November 2020.

“As a gay man, I support Teresa because her record of fighting discrimination against our community goes back decades, long before she ever ran for public office,” Collard (photo left) told Project Q Atlanta.

“I have personally seen how Teresa connects with people of all communities, including the LGBTQ+ community, and that is because you can't fake sincerity. Voters sense her sincerity and her honest desire to bring progressive leadership to the U.S. Senate,” he added.

Tomlinson raised $520,000 in the fundraising period ending in June, according to the AJC. The third quarter campaign finance report is due at the end of September.

Tomlinson touted her LGBTQ record in an interview with Project Q in May. She called President Donald Trump’s administration a “shipwreck” in a keynote speech at Georgia Equality’s annual gala in June.

The race for Perdue’s seat is one of two elections in 2020 for the U.S. Senate in Georgia.

Collard appeared in a campaign ad for Stacey Abrams during her 2018 run for governor against Brian Kemp.