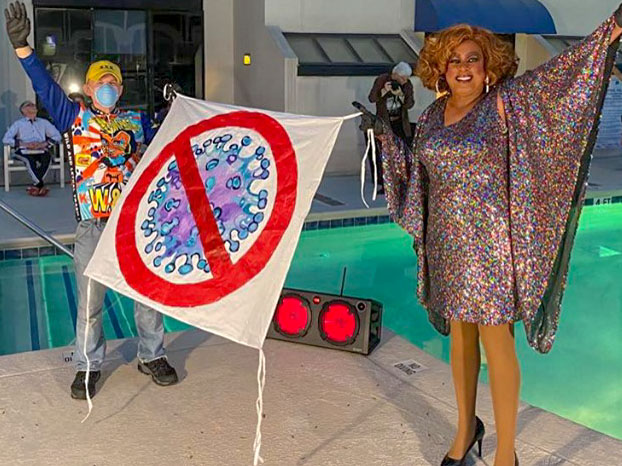 Atlanta drag queen Wild Cherry Sucret performed an outdoor show at a Midtown condo on Saturday as part of a series of tributes to local healthcare workers and first responders battling the coronavirus pandemic.

The performance was by the pool at the Ansley Above the Park condos on Piedmont Avenue. It took place during a nightly tribute that began earlier this month in which Midtown residents cheer on health care workers.

Gay Atlanta resident Stefan Shagwell (photo left) came up with the idea for the drag show, according to Sucret (photo right), whose legal name is Tony Kearney.

“Every night in Midtown, we have the 8 p.m. health care appreciation event with everyone clapping and making noise on their balconies,” he told Project Q Atlanta. “Why not put on a drag performance after that concludes?”

Turn up the volume! That’s the spirit, Atlanta! Thanks to @wildcherrysucret for a fun #flashdrag performance that made the whole neighborhood dance and cheer ❤️#weareinthistogether #atlanta #midtownatlanta #stayhome #goodvibes

Several other gay Atlanta residents have taken part in the nightly cheering for health care workers. Out writer Will Pollock put together a compilation of the tributes.

Barret Broussard, president of the Stonewall Bar Association of Georgia, posted an Instagram video of Queen’s “We Are the Champions” blaring during one of the nightly tributes.

“Thank you to our first responders for your commitment and selflessness during this difficult time,” Atlanta City Councilmember Antonio Brown wrote on Instagram. Brown is the only LGBTQ member of the council.

Atlanta and Hartsfield-Jackson firefighters paraded through the streets of Midtown to cheers from above Saturday evening. THANK YOU TO OUR FIRST RESPONDERS FOR YOUR COMMITMENT AND SELFLESSNESS DURING THIS DIFFICULT TIME!�� @cityofatlantaga @atlcouncil @atlfirerescuefoundation @atlantapolice @atlairport #Heroes

Atlanta Mayor Keisha Lance Bottoms issued a temporary shelter-in-place order for city residents on March 23. She ordered all bars, nightclubs and other businesses to close on March 19. Atlanta restaurants are also restricted to offering food by delivery, drive-through or takeout only.

LGBTQ-owned restaurants have adapted to the upheaval by reducing hours and offering new services. Drag performers have moved their shows online to keep the shows going and the tips coming.

Read our full coverage of the coronavirus pandemic here.