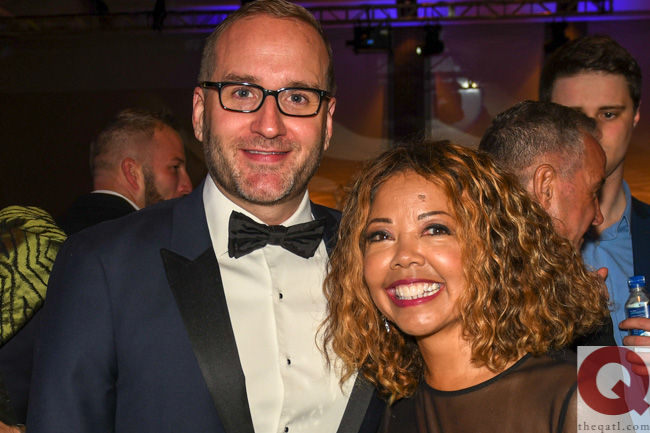 McBath (photo right) spoke to a crowd of some 1,200 people packed into the Hyatt Regency Atlanta ballroom for the annual fundraiser for the LGBTQ political and civil rights advocacy group. McBath (photo right), who marched in the 2018 Atlanta Pride parade, was inspired to run for the metro Atlanta seat after her son was shot and killed in 2012. She made gun control a central issue of her campaign, and she beat anti-LGBTQ U.S. Rep. Karen Handel to take the seat in 2018.

“Karen Handel showed us who she really is. She led the way on the atrocious child separation policy at our border. And she was still actively working to tear down and undermine the LGBTQ community,” McBath said.

“But the love that I have for my son and for you is what drives me to stand up to people like Karen Handel. The fierce instinct of a mother is why I pledge to you that I will not let anyone else with an extreme and dangerous view take this seat back in Georgia’s 6th,” she added.

McBath’s appearance came three days after she voted for the Equality Act during a House Judiciary Committee meeting. The bill, which amends the Civil Rights Act of 1964 to protect LGBTQ people, passed and now goes to the full House for a vote.

“We have all been created equal, and under the Constitution, we all deserve to live equally in this country without discrimination,” McBath said. “At times such as these, we must stand up and fight back. We have no other option, and I will continue to fight for you.”

HRC President Chad Griffin praised McBath for her support of the Equality Act in his speech, calling her “one of our champions.”

“You are our hero, and we are grateful,” he said.

“Together we sent a powerful message to anti-equality candidates from coast to coast — if you come for us, we’re coming for you on Election Day,” he said.

He called on voters to come out in 2020 to elect a pro-LGBTQ Senate and president.

“We are truly in the midst of a great awakening of our democracy,” he said. “2018 was proof of what happens when LGBTQ people and our allies organize and turn out to vote, and we’re not about to slow down now.”

HRC will host a presidential candidate forum at UCLA in October on the eve of National Coming Out Day.

“We’re not doing all of this because of one weak man with the world’s worst spray tan. We’re not because that really gives him way too much credit,” he said. “We’re doing this for the millions upon millions of LGBTQ people living in a state today without nondiscrimination protections so we can finally make the Equality Act the law of the land.”

It was Griffin’s final speech at the HRC Atlanta gala as president. He announced in November that he's stepping down in 2019. His successor will be announced in the next few weeks, according to Charlie Frew, an Atlanta resident and vice chair of the HRC Foundation’s Board of Directors.