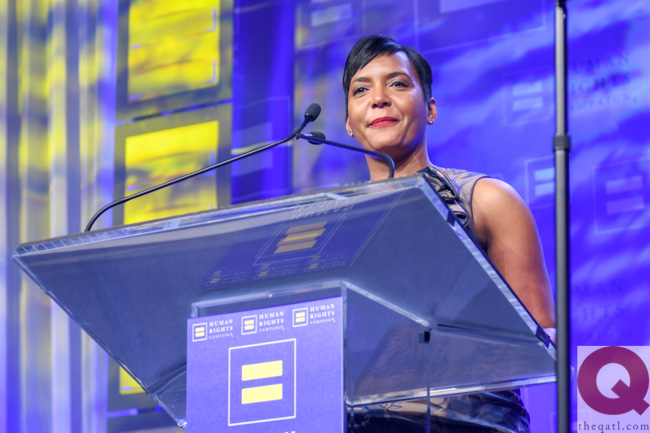 The gay glitterati was out in full force Saturday night for the 31st Annual HRC Atlanta Gala Dinner & Auction as a packed ballroom heard about the organization's work, honored local LGBTQ groups and addressed the Trump Administration's anti-LGBT effort.

“Atlanta has a strong record of inclusiveness. It is one of the prized attributes of our city, and it is a trait that we will continue to build upon each and every day,” Bottoms (top photo) told the crowd in her first address as mayor to the HRC Dinner.

“As mayor, I am committed to surpassing the HRC’s MEI criteria as we go forward,” Bottoms said.

The mayor also noted her appointment on Friday of the city's first-ever full-time LGBTQ liaison, HRC Board of Governors member Malik Brown, and the creation of a 32-member LGBTQ Advisory Board. Bottom also said Taylor, the first openly gay man to serve in the Georgia Legislature, would head the city's first-ever Mayor’s Office of Equity, Diversity & Inclusion

Calling herself a “sucker for a good quote,” Bottoms got a strong reaction by citing a famous former Atlantan.

“I thought of no better quote than from an entertainer. I found one from RuPaul and it said, ‘Never forget that the most political thing you can ever do is to follow your heart,” she said. “Atlanta will always be a place where everyone can follow their heart and as your mayor, I stand with you offering the political will and political capital to ensure that that remains true.”

In a non-political point in the evening, HRC honored longtime drag troupe the Armorettes with the Leon Allen and Winston Johnson Community Leadership Award for raising money to fight HIV/AIDS. Victory for the World Church and pastor Dr. Kenneth L. Samuel received the Dan Bradley Humanitarian Award for their work helping LGBT homeless and youth and those living with HIV. Samuel was also a frequent talking head in national media circles before the 2015 Supreme Court ruling on marriage equality, discussing his views as a pro-LGBT faith leader.

President Trump was never far from many speakers’ minds throughout the evening, with Baldwin (second photo) — the first openly LGBT U.S. Senator in history — making the first reference.

“Let’s be clear about what we’re up against,” she said. “With this president in the White House, the progress we’ve made over the course of a generation is going to remain under attack.”

She noted that there will be more anti-LGBT nominees to federal courts, more assaults on scientific research that would improve the lives of LGBT Americans and a foreign policy that ignores when LGBT people are tortured or executed in other countries around the world.

“Right here in Atlanta, this administration has banned the CDC from even using the word ‘transgender.’ And President Trump continues to disrespect patriotic transgender Americans who want to serve their country,” Baldwin said. “So we’re going to have to grit our teeth and stiffen our backbones, or as one of my mentors in the Senate used to say when the women were going into battle, ‘Square your shoulders, put on your lipstick and head out to the battle.’”

Baldwin called on people not to get discouraged, to keep fighting and to run for office.

“A generation from now, we will look back at this moment and we will remember this moment not for the way hatred and bigotry fueled the politics of the past few years, but for the ways love and compassion helped our movement grow, not just bigger but stronger,” she said.

“Stronger because we became more diverse, elevating leaders of color and looking for representation in places that we once wrote off as hostile territory. Stronger because we found common cause with other communities being targeted by this administration: religious minorities, immigrants and working poor. Stronger because just as we once drew inspiration from the civil rights movement and still do, our movement is now standing as a model for other communities seeking their voice, their own representation and their own seat at the table. We are here, we have real power because of people who came before us and refused to back down and refused to be silenced, and now it’s our time,” Baldwin added.

“Every time we think this president’s behavior can’t get any more erratic or this vice president’s attacks on our community can’t get anymore repugnant, like clockwork, a news alert lights up our phones and proves us all wrong yet again,” Griffin said. “By the way, have you even wondered why Mike Pence is so obsessed with gay people? Wouldn’t you love to see his browser history? Maybe not.”

Like Baldwin, Griffin encouraged the crowd not to give up in the broader fight for LGBT rights.

“It’s tempting to simply want to give up, to tune it out and turn it all off,” he said. “But you know what, that’s exactly what Donald Trump, Mike Pence and that entire cabinet of deplorables are hoping we’ll do. They want us to stop paying attention long enough for them to implement their blueprint of bigotry on this country. But we can’t give in, we can’t grow complacent, we can’t back down and together we have got to hold Donald Trump’s tiny little hands to the fire each and every day.”

Griffin also pointed to the victory by Sen. Doug Jones over anti-LGBT former Judge Roy Moore in Alabama last as a sign.

“My friends, mark my words: this is only a preview of things to come. As our victories in North Carolina, here in Georgia and Alabama have proven, the days of attacking our community to scare up votes are over and a reckoning is coming this November. Because if we can win in Alabama, we can win anywhere,” he said.

Griffin, citing Trump’s “catastrophic compulsion to bullying, to lie and to divide,” also had a message for politicians who take a seat when his administration targets LGBT people.

“If you refuse to stand up to this president’s hateful agenda, and if you continue to attack our community, then we’re going to organize, mobilize and we’re coming for you on election day,” he said.

“It is during moments of great struggle and strife that we rise, and it’s through our resistance to tyrants and our persistence towards justice that we change the course of history. So let’s do what Harvey Milk said and give people hope. Let’s recall the fierce urgency of now, let’s remember that yes we can, and that we are stronger together,” he said.