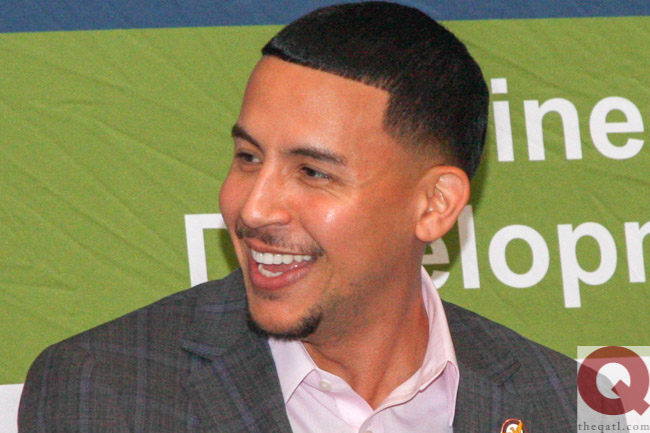 Event promoter Melissa Scott notices the influx of corporate support during Stonewall Month, and she said LGBTQ Atlanta needs to be aggressive about keeping it year-round.

The DJ and “Love & Hip Hop Atlanta” star made the comments during the Atlanta Gay & Lesbian Chamber of Commerce’s annual LGBTQ Business Summit on Friday. AGLCC Executive Director Chris Lugo and Board Chair Petrina Bloodworth moderated a panel discussion that capped the day-long series of events.

“You can’t support me quietly,” Scott said. “All year long it’s hush hush hush, but in June you have so much sponsorship stuff for me. But then in July it’s like, uhh we don’t do gay.”

“It’s about just taking a more aggressive standpoint when it comes to respecting my disposable income. Our disposable income is big, so you can’t ignore it all the other months but June,” she added.

Georgia Voice sales executive Dixon Taylor said that national marketing and public relations firms have reached out to her recently about connecting with LGBTQ Atlanta.

“What that says to me is … so many people are beginning to understand that we have got to start connecting with each other, and these companies are calling because they have clients who’ve asked to reach out to the LGBTQ community,” she said. “You’ve got to recognize that we’re that big, that we are important, that we have a lot of money before you start doing that.”

Atlanta City Councilmember Antonio Brown (photo) said that “the consciousness in the world is evolving” on LGBTQ people. Brown became the first black LGBTQ member of the Atlanta City Council in April. He is also the owner of menswear label LVL XIII.

“Things have shifted and the perspective has shifted,” he said. “The evolution will continue to happen. I say that because as much as I feel we’re so segregated from the rest of the world, at the end of the day we’re still human beings.”

“Lead with your true self. Represent who you are and do the right thing and people will be inspired by that and respect you for that, and I think that’s greater than anything,” he added.

Janaya Davis, a retired professional boxer and owner of BoxFit Fitness & Performance Studio in College Park, highlighted the importance of being visible.

“I think that the LGBTQ community is where it is now because of the visibility that we’ve put out there,” she said. “We’ve gained the respect. The visibility of our lifestyle has gained a lot of respect, and the more we’re out there and doing positive things, then people will embrace us.”

Scott said having the support of LGBTQ Atlanta helps her when dealing with potential corporate partners.

“I know I got this crazy rainbow army behind me. And if somebody disrespects me, I’m going to tell them,” she said. “And there is a huge community that I have behind me. That’s why I feel confident when I walk into a room. I don’t mind demanding that we need this because I have an army behind me.”

The panelists called for more unity when asked what they hoped to see for LGBTQ Atlanta five years from now.

“There’s a lot of siloing,” he said. “It’s just natural. In our history, we had to fight for a lot of space.”