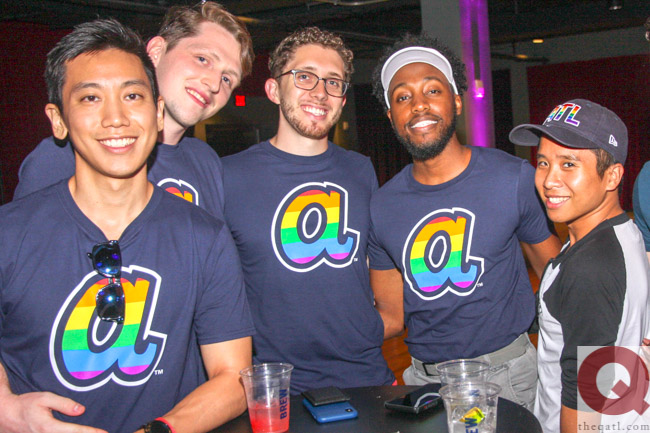 Some 2,200 queer Atlanta Braves fans set a Pride Night attendance record for the annual event at SunTrust Park on Friday.

Gone are the days where a few dozen LGBTQ fans would show up for the then-lowkey event, which started in 2010 at the team’s old Turner Field home.

Now there’s a pregame party at the Coca-Cola Roxy featuring DJ Kimber from Nonsense ATL. Fans wore their rainbow-colored Braves caps from previous Pride Night promotions and picked up the new item that came with the ticket price — a Braves t-shirt with a rainbow logo. Atlanta Braves President and CEO Derek Schiller addressed the crowd to welcome them to the event.

Fans headed into SunTrust Park for the game against the Philadelphia Phillies after the pregame party, with many forgoing their assigned seat to watch from above in the Xfinity Rooftop Lounge.

The Braves trailed most of the game before Brian McCann hit a two-run single in the bottom of the ninth inning to send the hometown team’s fans away with a smile, post-game fireworks lighting the sky.

The team donated $3 from each Pride Night ticket sold to Lost-N-Found Youth.