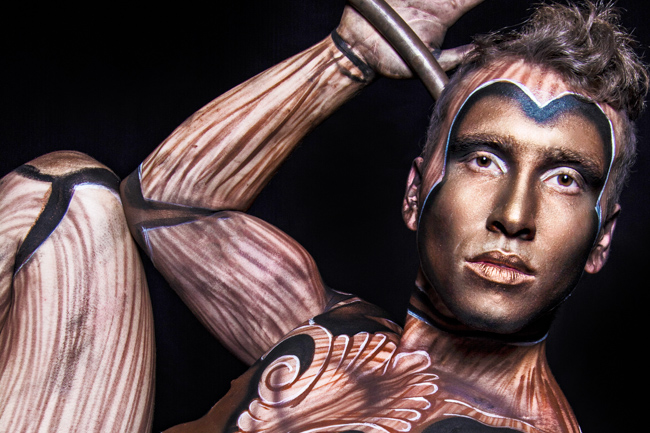 When human bodies become canvases, art is elevated. It's a transcendence that makes local painter Roberto Hernandez a master of living art.

But that’s not the queer artist’s only work. His brushstrokes can be seen across Atlanta; his murals around town would stretch miles long. His innovative pieces brought to life on human models are seen in this week’s Q cover feature shot by contributing photographer James L. Hicks (images below).

Born in Acapulco, Mexico, Hernandez discovered his creative energy at an early age. At his elementary school teacher’s urging, he applied to and was granted a scholarship to La Casa de la Cultura(“The House of Culture”), a prestigious art institute in his home region. While honing his craft, he was instructed by traditional Mexican artists who mentored him in various mediums, techniques and art movements around the world.

Hernandez learned to see art as a religious experience – literally.

“I always knew I had this love and passion for art,” he tells Q. “Growing up Catholic, religious motives were a great inspiration for my early work. I had some of the best teachers, who had the utmost confidence in my ability. Art to me, is a spiritual fulfillment.”

Hernandez’s family immigrated stateside when he was 12 years old. He continued to develop and mold his passion for art throughout high school and ultimately earned a BFA from Georgia State University. However, he found himself struggling for years to pursue his dreams as an artist, even for a time becoming disheartened with his life’s passion.

Despite an inability to work in his chosen field due to his immigration status, as well as an as-yet-unfound commercial success, he finally found a way to produce art that brought the recognition he longed for.

“My initial paintings weren’t selling,” Hernandez says. “Through a friend’s show, I was introduced to body painting by other artists. I was fascinated by the concept. I knew that it was for me. From there, it became my niche. I was able to market myself and set myself apart thanks to the demand for my body painting pieces.”

For pieces that are only temporary, body painting requires extensive time and intense concentration.

“One painting can take at least six hours if not more,” he says. “What I love about body painting is how precious each piece is, because unlike murals or other paintings, body pieces don’t last. They only persist to exist in a photograph once the paint washes away.”

After receiving DACA during the Obama administration, Hernandez was able to create his own art business. It allows him to be more accessible to opportunities and really establish a foothold as a professional artist.

“I have worked really hard to make a name for myself, yet I don’t want to just be known as a body painter,” he says. “Through my company, I have been pursuing art direction and production and creating a welcoming network for other artists like me.”

With the support from Atlanta’s developing arts community, Hernandez instructs, works in theatrical and special effects make up, produces larger-than-life murals, designs costumes, art directs theatrical and film projects, and empowers other artists to pursue their dreams like he did.

This article originally appeared in Q magazine. Read the full issue below, and pick it up at LGBTQ venues around town.