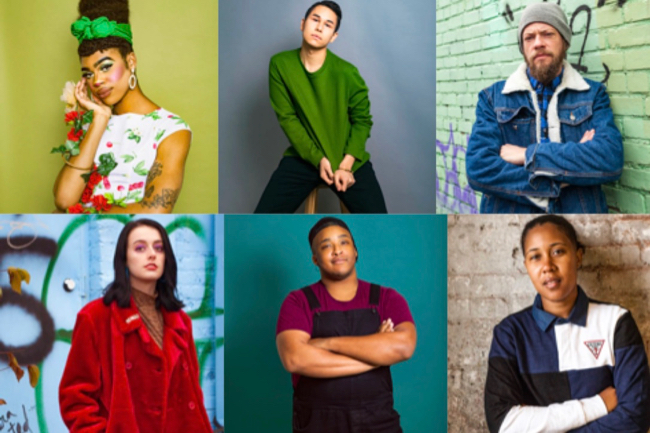 One of the gifts the gods laid on Q magazine in our first year is an ongoing collaboration with photographer Jon Dean.

His stunning portraits below help us step boldly into the New Year with queer Atlantans who we’re watching to make 2019 waves and set off a ripple effect of 2019 vibes.

We also ask about their New Year's Eve plans from more than a dozen NYE party options.

My goal is to actively be a part of the intentional change that I envision for the LGBTQ community by means of being more involved with our local Atlanta political scene, curating and collaborating with events that uplift and shed a positive light on the LGBTQ creative scene and to continue providing bigger platforms for our community to have a strong presence in Atlanta.

My biggest project is working on the team that is revitalizing Underground Atlanta. This is a huge project that will have a major impact on the heart of downtown.  I am working diligently to promote inclusivity and preservation of Atlanta's diverse culture that keeps our city vibrant, and that includes various opportunities for creatives and the LGBTQ community as a whole.

The Peach Drop at Underground Atlanta, the LovHer Heir Affair at Einstein's, and New Year, Who Dis? at the Bakery.

For us to keep coming together and stop the internal fighting and remember that our differences are what makes us an unstoppable group when we do it together.

Goals for the New Year

Get more costuming done, get more active for trans queers over 30.

Making Alphabet Soup a 401(c) , make our bar nights at the Eagle more profitable for the group, and keep working on trans campout, a yearly campout for trans and non-gender people and their partners.

I know there are a few good queer events, and my go-tos are always Marys and the Eagle.

I hope that queer ATL grows to be more vigilant and vocal in shutting down the discrimination that exist within, as well as outside of, our community. We are a beautiful group of artists, performers, movers and shakers who inadvertently hold ourselves to standards that were not made for us to begin with. I hope that, with the continuation of increased representation on a political and a social level, we manifest the agency to squash old standards and establish new ones.

To satiate my passion to turn the world on its head in all aspects. I am going to create more, mobilize more and do more next year in an effort to make myself heard. 2018 was a year of development for me, and I aim to showcase my talents as a writer, videographer and social activist. Next year will be full of successes.

I am most excited to continue with the biggest project of my life: my transition. Transitioning has been a long, hard journey that has molded me physically, mentally and emotionally. It is a challenging endeavor that has made me more self-determinant as an individual.

Every day that I wake up and battle my dysphoric demon is a step in the right direction. Every day that I step out of the house to be seen, heard and engaged by the people around me is a statement that I am here and deserve to be respected. Every day that I make a difference in someone else's life is a reminder of where I've been and where I'm about to go. More progress is on the horizon, and I am so happy to have the privilege of working towards excellence in the years to come.

I'll be chilling in my bed with my good Judys: Domino's pizza and a big bottle of Moscato! You're all invited!

In 2019, I want queer ATL to get the national recognition it deserves when it comes to editorial voices and artists! I'm forever in debt to the queer ATL community that gave birth to my queer identity and a platform to express myself. I want everyone who has been blessed enough to have come from or come through queer ATL to make an effort to praise and promote queer publications like Wussy and trailblazer artists like Corian Ellisor, Brigitte Bidet and Jaxrenee. Also, more gaysian representation.

I have a dream of hosting a queer cabaret! More to come.

I'm trying to remember to take breaks more often to regroup and get inspired, get better at archiving my work. This tends to fall by the wayside when I get busy.

I'm toying with a few ideas, mostly involving making more work in different mediums like set design, installations, etc. But I'm afraid of jinxing any specifics at this point.

The SFQP x Morph Party at the Bakery looks cute. A bunch of my faves are performing. I'm also a fan of staying in and watching the ball drop with some pals.

Next year is the 50th anniversary of Stonewall, so I hope queer Atlanta continues to work together and work smarter in 2019. With the political climate and gentrification always throwing us for a loop, now is the time to build, more than ever, strategically across intersections. I also hope queer art gets weirder and more provocative.

I'm releasing music videos and working on my next album, trying to depend less on coffee, and continuing to put forth the energy I want to see in the world.

The 5thAnnual Southern Fried Queer Pride Festival! It's a milestone for us, especially being an underground, DIY queer festival. I'm also working on a handful of events in hopes to keep Atlanta queer and weird.

If you want to bring in 2019 surrounded by vogue battles, drag queens doing splits off the stage, DJs keeping you dancing all night and community, come to New Year, Who Dis?, a NYE extravaganza put on by Southern Fried Queer Pride and Morph at The Bakery.

A version of this feature originally appeared in Q magazine. Flip through the full issue below.