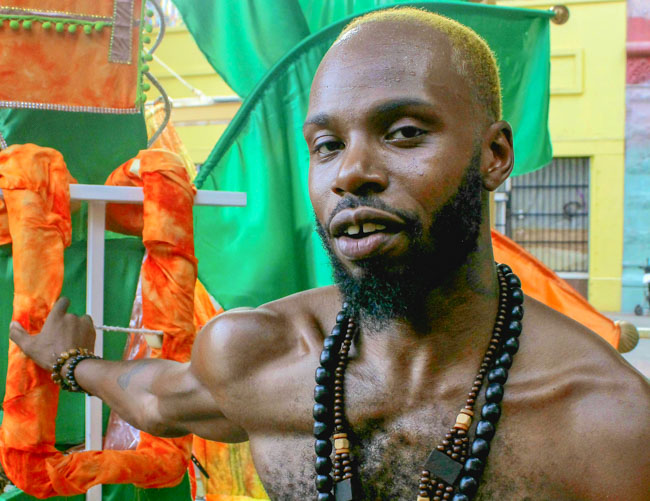 Five LGBTQ artists have been commissioned to create a mural on the Atlanta Beltline to honor and celebrate people living and thriving with HIV.

Living Walls, an Atlanta non-profit that creates public art for social change, also scheduled a series of events leading up to the mural’s unveiling in late August.

FHI 360, a non-profit working with the Centers for Disease Control & Prevention on its “Start Talking, Stop HIV” campaign, approached Living Walls about the mural in spring 2018.

“We had a friend who was living with HIV and we knew that we wanted for him to do the mural,” Living Walls Executive Director Monica Campana told Project Q Atlanta. “Then the budget kept getting delayed later and later in the year, and around September, we were approached again by them to try and push for this project to happen. By this point, my friend had passed. It became way more personal.”

“There were only so many moments when [the friend’s HIV status] was mentioned and I wondered is it because he never felt like there was space for that? Because there’s still too much stigma for it? This is 2019 and we’re still losing young people to this,” Campana said. “It was a moment where we realized this is important and we need to have this conversation.”

Living Walls recruited several speakers and held panel discussions throughout the summer on the history of HIV in the South, health policy and HIV criminalization, and how art can be used as a tool for activism.

Millar (photo) wrote a poem that he will paint onto the mural.

“They asked all of us if we would develop ideas around what a statement would be,” he told Project Q. “I couldn’t think of anything formal. I just could sit down and think about what my life has been like and how living with HIV has not been a burden.”

“It’s been something that’s actually unlocked a lot of light in my life and has also ignited me in ways that I know if I had any other life I would not have been. It’s allowed me to be free and be okay with who I am and where I am,” he added.

Living Walls is partnering with La Choloteca for a panel discussion about HIV and Latinx health on Saturday at 7 Stages. It’s followed by an afterparty at Aisle 5.

They hope to start painting the mural on Aug. 17, according to Campana. That night, Living Walls and Wussy host a panel discussion on southerners living with HIV through art at Annex Bookstore.

Artist and performer Kia LaBeija will talk about using art as a tool for HIV awareness on Aug. 23 at the Hill Auditorium at Woodruff Arts Center.

Living Walls hopes to unveil the mural on Aug. 25, according to Campana.