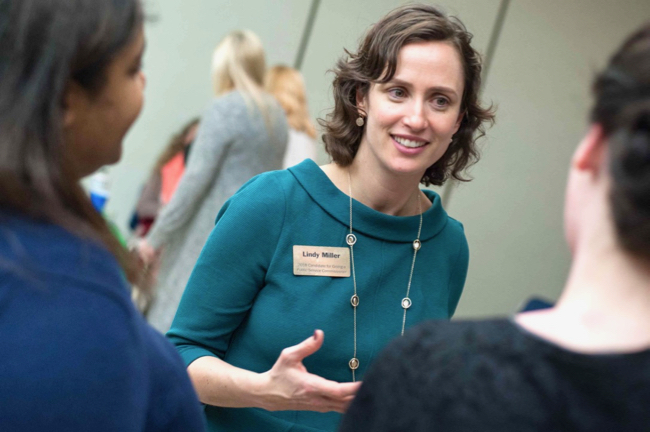 “We now have a commission that is 100 percent bought and paid for by utilities,” she told Project Q Atlanta.

She noted that Georgia’s energy bills are the third highest in the country.

“This race is about justice. And I see injustice, and I’m working to raise and amplify those voices,” she said.

Miller has called the public service commission “the most important seat that most people have never heard of.”

The five-member commission sets the rates charged by telecommunications, gas and electric companies, as well as enforces the standards for quality of service. The commission has had a larger spotlight on it recently because it's in charge of deciding the fate of Plant Vogtle, the nuclear power plant under construction about 25 miles south of Augusta. The project is billions over budget and years behind the originally projected schedule.

If elected, Miller would become the first Democratic woman on the commission and first Jewish woman ever elected statewide to a partisan seat in Georgia.

She joins John Barrow as the only two statewide Democratic candidates to make it to a runoff. Barrow faces Republican Brad Raffensperger for secretary of state.

Miller nabbed the endorsements of both Georgia Equality and Georgia Stonewall Democrats.

“I think that the message of fighting for regular people, fighting for justice, having folks who are qualified with skills who will listen to a broad range of choices — those are universal values that voters are looking for,” she said.

“I have a mentor from my time at Deloitte who is gay and always talked about how important it was to bring your whole self to work. I think voters are hungry for the authenticity. I’ve been proud to earn the support of folks in the LGBTQ community,” she added.