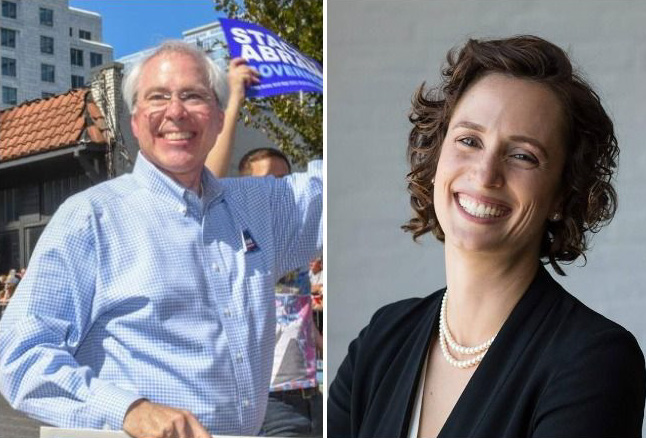 As the governor’s race and a metro Atlanta congressional race enter the court system, LGBTQ activists are sounding off on the importance of two statewide races heading to a Dec. 4 runoff.

Democrat John Barrow (top photo, left) faces Republican Brad Raffensperger in the race to succeed Brian Kemp as secretary of state. Kemp has faced intense criticism for how his office has handled the election process throughout his gubernatorial campaign against Stacey Abrams. He resigned from the position two days after Election Day.

“The shameful voter suppression we have seen around this election shows the importance of the secretary of state,” Jason Cecil, Georgia Stonewall Democrats board member, told Project Q Atlanta. “Election integrity is the most important feature of our system, and without it we lose our republic. Every voter should return to ensure our elections are protected by electing John Barrow in the runoff.”

Barrow, a former U.S. representative, had a mixed record on LGBTQ issues in Congress but now he supports a statewide LGBTQ-inclusive nondiscrimination law and opposes anti-LGBTQ “religious freedom” bills.

Raffensperger, a state representative in Johns Creek, voted in favor of a controversial “religious freedom” bill that passed in both chambers in 2016 before Gov. Nathan Deal vetoed it.

“This election is showing all Georgians the importance of having someone who will take the oversight and modernization of our election process seriously,” said Jeff Graham, executive director of Georgia Equality. “John Barrow is the person best suited for that role. In addition to that, voters deserve someone who will serve as a voice to fight against the gerrymandering of districts when they are redrawn following the 2020 census.”

Barrow has a unique perspective on gerrymandering. The Republican-controlled legislature redrew his congressional district in 2010, causing Barrow to move from Savannah to Augusta to win his 2012 race. He ended up losing the seat in the next election two years later.

“Anyone who pays utility bills should care who is elected to the PSC. Right now, there is no one looking out for you, the consumer. Anything utilities like Georgia Power want, they get. Electing Lindy Miller will finally put an advocate for consumers on the PSC,” said Juliana Illari, board member at Georgia Stonewall Democrats.

Georgia Equality’s Graham urged people to vote early, by absentee or on Election Day on Dec. 4.

Meanwhile, Stacey Abrams’ scramble to track down any remaining uncounted votes continues. The latest move is a lawsuit Abrams and the Democratic Party of Georgia filed in federal court over the weekend “challenging the arbitrary, unlawful rejection of thousands of absentee ballots and seeking relief for voters whose votes were wrongfully rejected despite good faith efforts on the part of the voters to properly cast their ballots,” the Abrams campaign said in a press release.

Georgia Equality joined a grassroots coalition called Georgia Engaged to do mass outreach to voters across the state to make sure provisional ballots were counted by the Nov. 9 deadline.

“In a race that is this close and with the unusually high number of challenges and irregularities reported on Election Day and by those who voted early, certification should not be rushed, and election officials must do everything in their power to protect the integrity of the outcome,” Graham told Project Q regarding the effort.

In the 7th Congressional District race, Carolyn Bourdeaux filed a lawsuit on Sunday seeking to delay Gwinnett County from certifying its election results so that rejected absentee and provisional ballots can be counted.

“There are almost 1,000 absentee ballots in our race that Gwinnett County is going to reject for the most trivial of reasons. The ballots will probably decide the outcome,” Bourdeaux wrote in an email to supporters Monday. “Last night, we filed a lawsuit demanding justice. We’re asking a federal court to make sure that every eligible vote is counted.”

Incumbent Republican Rob Woodall leads Bourdeaux by about 900 votes, with Woodall just barely above the 50 percent threshold to win the race outright. However, the current margin is less than one percent, making it eligible for Bourdeaux to demand a recount.