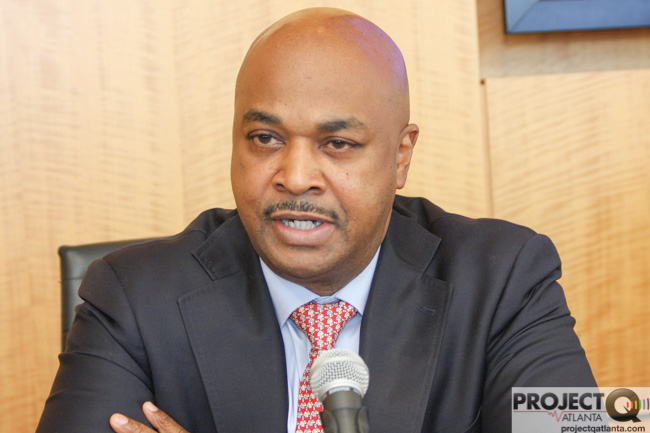 LGBTQ activists are at the center of a growing push in the City of Atlanta to eliminate jail time and reduce the fines for possession of small amounts of marijuana.

The support is for a proposal from City Council member Kwanza Hall (photo), who holds the District 2 seat and is running for mayor. Hall wants to lower the penalties for less than one ounce of marijuana, a reduction that LGBTQ advocates say will help black transgender people who are targeted with jail time.

“What we are doing here is trying to minimize the barriers and challenges that keep black trans people from being able to live full and authentic lives,” said Dean Steed, a community organizer with the trans-led Solutions Not Punishment Coalition. The group was among several LGBT, racial justice and civil rights organizations that held a rally on the steps of City Hall in April to support Hall's ordinance.

The reform effort seeks to eliminate jail time and lower the fine to $75 for possession of marijuana under one once. Under current city ordinances, it's a misdemeanor offense that can result in arrest, a 6-month jail sentence and a fine up to $1,000. State law allows for a 12-month sentence and a $1,000 fine.

The lessoning of penalties mirrors what the City of Clarkston did in 2016. A similar measure in the City of Temple failed on May 1.

Steed said an arrest even on a misdemeanor offence can have devastating consequences, particularly for low-income people who may struggle to post bail and hire an attorney.

“Marijuana, in particular, is key because of how many young people get targeted,” said Xochitl Bervera, director of the Racial Justice Action Center. “When we look at the arrest rates and who is in jail, it is predominantly black youth, under the age of 35. And we know that that has devastating consequences on people’s lives.”

Bervera’s group, an anchor organization to SNaP Co, helped lead an effort in 2016 to document the experiences transgender people have with the Atlanta Police Department. Trans Voices on Police Abuse & Profiling in Atlanta included recommendations to reform a slate of city ordinances, including the one about marijuana possession.

Bervera said the city's quality of life ordinances – including the one on marijuana possession – are often used to target certain communities, including transgender people who may be presumed to be sex workers.

“We need to be reducing the number of contacts that there are between the police and our communities that leave us so vulnerable,” Bervera said.

But the effort to reform the marijuana possession ordinance has stalled. After passing out of the council's Public Safety Committee earlier this year, the full council side-stepped a vote and put a hold on the measure on May 15. Council members voiced concerns about marijuana being a gateway to other drugs echoing the concerns of Mayor Kasim Reed and police Chief Erika Shields.

Hall said he was confident the ordinance would move forward – again – after more conversation.

“This does not decriminalize, in essence, it only reclassifies. And the semantics really do matter,” Hall said.

The effort has gained a supporter in state Sen. Vincent Fort, an LGBT ally who is also running for mayor.

Both Bervera and Steed emphasized that because the LGBT community is not a monolith, people within it have had different experiences with police. They both spoke about a need to listen to LGBTQ people that have been impacted by the city ordinance and police interactions.

“For white people, for cisgender people, for people with class privilege who are part of the LGBT community – who are not impacted in the same ways by policing – to, one, recognize their privilege and listen to those who are being directly impacted by the system in a negative way,” Steed said.

Project Q Atlanta reached out to City Council member Alex Wan, the council's only openly LGBT member, and we'll update the post if he responds.