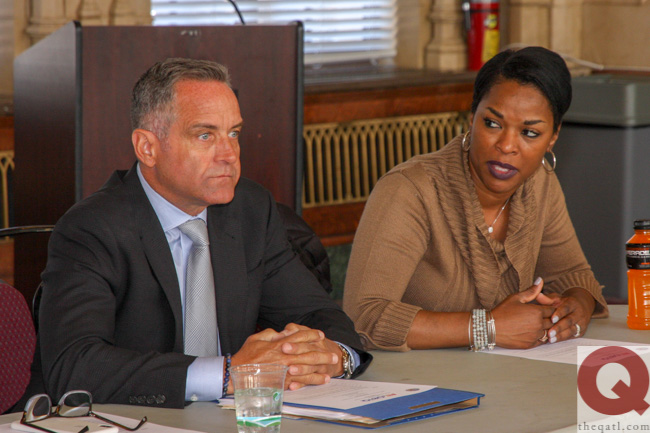 The request from the mayor's LGBTQ Advisory Board will be presented to Bottoms on Jan. 28 when Board co-chairs Kirk Rich (top photo, left) and Pam Stewart (top photo, right) meet with her.

The board will ask that Bottoms allocate $95,000 to hire two part-time nurses and $5,000 for lab supplies. The nurses would provide PrEP services in the Fulton County Board of Health’s mobile HIV testing clinics, as well as PrEP education and support to primary care providers, Grady Health clinics and hospitals.

The board's Atlanta PrEP Expansion Project wants Bottoms to use the $100,000 the city included in its annual budget last June for fighting HIV/AIDS. It was the first time money was allocated in the city budget to go towards that purpose. Bottoms said at the time that she would work with the board to decide how those HIV funds will be used.

Jonathan Russell, director of development at Woodruff Health Sciences Center at Emory University, said the project will expand access to and educate people on PrEP in Atlanta.

“It aligns with the Fulton County Strategy to End HIV, it’s a good example of intergovernmental cooperation from the City of Atlanta, and it really does give you a lot of bang for the buck,” Russell said at the Jan. 11 meeting of the advisory board.

Russell is one of 34 members of the board that Bottoms established last May.

Rich also said that he and Stewart will ask Bottoms for more money to fight HIV/AIDS.

“My hope is that when we meet with the mayor, we get more money,” he told Project Q Atlanta. “We will always leverage anything we can get, especially in terms of things that deal with HOPWA and HIV and housing. Those are really important.”

State Rep. Park Cannon — who lobbied Bottoms for the $100,000 earmark — is a member of the board’s LGBTQ Health Working Group. She said they are evaluating various requests for HIV funding to be included in the city’s budget for Fiscal Year 2020, which starts July 1 of this year.

City of Atlanta officials last September acknowledged that the city is “under a crisis” with HIV.