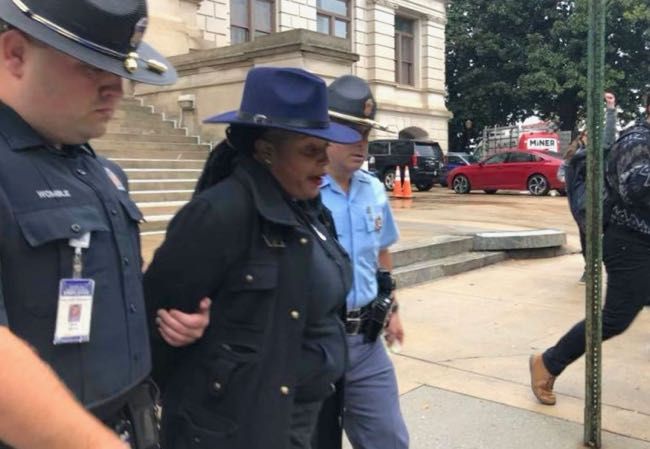 State Sen. Nikema Williams and several LGBTQ activists were among 15 people arrested during a demonstration at the State Capitol on Tuesday.

The protest inside the Gold Dome, which sometimes numbered up to 100 people, was to urge the Georgia Secretary of State’s office to count all votes in the state’s hotly contested gubernatorial election. State troopers and Capitol police arrested the protesters, who were taken to the Fulton County Jail and booked on a misdemeanor charge of disrupting a General Assembly session.

Mary Hooks, the lesbian co-director of Southerners On New Ground (SONG), was leading a crowd in a call-and-response in the Capitol rotunda when police detained her.

“Our lives are on the line. Elections are important,” Hooks (top photo) said before being handcuffed and arrested.

“We called it for this very simple demand that the government do its job and count every vote, which should not be a demand – it should just be a basic expectation of elections and government,” Shapiro told Project Q Atlanta.

Williams, an LGBTQ ally elected to her Atlanta district in 2016, spoke to media as she was being arrested.

“I was not yelling. I was not chanting. I stood peacefully next to my constituents because they wanted their voices to be heard, and now I’m being arrested,” Williams said according to WSB-TV.

Hooks, Ward and Willis were charged with a misdemeanor and released on $3,000 bond later Tuesday, according to the Fulton County Sheriff's Office. Williams was booked for disrupting a General Assembly session and obstruction, and released on $6,000 bond.

SONG set up an online fundraiser to pay for bail for those arrested during the protest.

LGBTQ state Reps. Park Cannon and Renitta Shannon were among those who spoke at a press conference Tuesday afternoon. Cannon spoke out against the arrests.

“They chanted the same things that members of the House and Senate caucuses chanted earlier this morning, which was that every vote should be counted,” Cannon said.

Williams is scheduled to appear at a press conference with other Democratic leaders and officials from Stacey Abrams' campaign on Wednesday. The event is to “reveal evidence on provisional ballots and disenfranchised voters,” according to a press release.