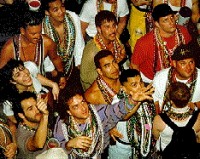 Mardi Gras is more than a party; it’s a state of mind, defining the cultural traditions of its host city. New Orleans is the most familiar, but LGBT celebrations across the world draw LGBT travelers.

This year’s March 4-8 New Orleans celebration will draw one of the largest LGBT crowds in the country. Carnival season in New Orleans begins on Twelfth Night (Jan. 6) and runs through the beginning of Lent. Mardi Gras, or Fat Tuesday, is the Day of Masking. Costumes are elaborate with sequins and feathers dominating. The French Quarter is where the more risqué events take place, and the lower French Quarter is the center for gay Mardi Gras, where extravagant costumes vie for the coveted Bourbon Street Awards (top photo).

The traditions of gay Mardi Gras began in the 1950s. Local matrons would beg for tickets from their hairdressers because the LGBT parties were among the top events. In 1962, the LGBT Krewe of Yuga threw its first ball at a badly chosen sight, a private children’s school. No sooner had the tableau begun with Queen and Maids expectantly waiting the adoration of spectators when police cars roared up and the ball was raided. Doors were locked and people were unceremoniously hauled to jail. The mystique and popularity of these balls skyrocketed.

The Night of the Black Mask, held the Friday before Mardi Gras draws thousands to the South’s Oldest Leather Block Party. Sponsored by the Phoenix/Eagle and Lords of Leather, the event is hosted at the corner of Elysian Fields and North Rampart Streets. 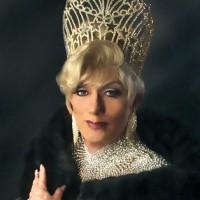 At 2 p.m. every Mardi Gras, revelers head over to Ambush Headquarters, on Bourbon Street, for the annual Krewe of Queenateenas [KOQ] Official Gay Mardi Gras Bead Toss. Now in its 24th year, the bead toss is led by the KOQ’s reigning King Cake Queen (middle photo), complete with changing balcony theme. For the best pearls on Bourbon Street, join the crowds in front of that balcony.

But New Orleans isn’t the only place for travelers during Carnival season. If time and money are no object, go to Sydney Australia for undoubtedly the most popular LGBT Carnavale celebrations, this year Feb. 19 – March 6. Lily Tomlin and Armistead Maupin will be there. The Sleaze Ball is a central attraction. Check out Fare Compare for flights and lock in your hotel room soon.

If you like the idea of hot bodies on the beach, Brazil throws one of the world’s largest parties with Rio’s Carnavale (bottom photo), this year March 4-8. Over a million people from all over the globe attend and it is said that one in 4 are gay. The LGBT celebration began in 1959 when designer Ferdy Caerneiro rented a bus, filled it with friends and spent Carnival in his hometown Uba. The main attraction was a street band of men dressed in white suits and straw hats pretending to play musical instruments.

Today the parades feature lively bands and costumes. In addition to gay pool parties and large dance events, you can also join street festivals and parades all over the city. An attitude of good will and harmony pervades everything. Zoom Vacations offers a 6 day Carnival trip to Rio for just under $3,000.

Rumor has it the cost for tickets will skyrocket in 2012 because of the robust Brazilian economy, so this is the perfect year to attend. Check out Guide to Gay Rio de Janeiro.