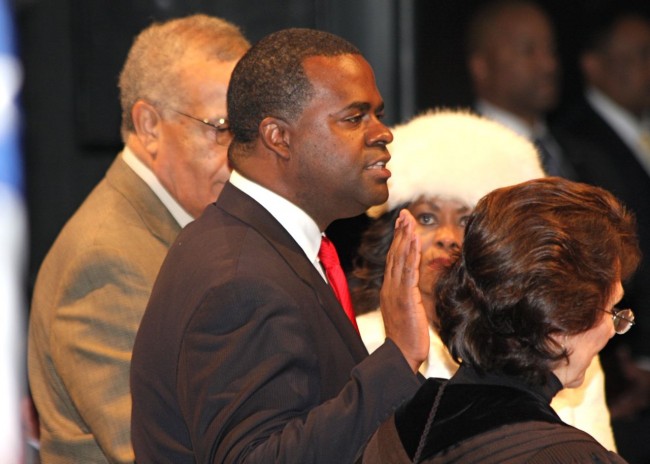 After a campaign season in which gay issues often grabbed headlines, there was little talk of LGBT issues during the inauguration Monday of Mayor Kasim Reed and Atlanta’s other elected officials.

Reed delivered a 25-minute, nearly 2,900-word inaugural address, laying out his vision for the city and “our responsibility to our past, to our present, to our future and to one another.” He pledged to become the “mayor of the small businessperson” by improving customer service at City Hall and revamping the city’s permitting process by year’s end; hire more police officers and get tough on crime; open all of the city’s recreation centers; and work with the council and other elected officials to address Atlanta’s vexing problems.

But for Reed, who courted gay voters and worked to overcome his lack of support for same-sex marriage during the campaign, his inaugural address gave only passing mention to LGBT concerns.

“We must recognize that we have a responsibility to one another; to transcend that which divides us and to respect that which makes each of us unique,” Reed said during the address. “The diversity of our gender, race, age, sexual orientation, religion, cultural background and personal heritage is what must bring us together, because the tapestry of Atlanta is a beautiful one and must be a source of strength, never of weakness.”

Reed received support from LGBT voters during the race and ran an inclusive campaign. But he struggled at times with his position on same-sex marriage. His runoff opponent, Mary Norwood, supported marriage equality and enjoyed vocal support among some longtime LGBT activists. The marriage divide seemed to split LGBT voters during the campaign and Reed was soundly defeated in Midtown’s District 6, which is often considered to have the heaviest concentration of LGBT and progressive voters.

Reed was sworn into office along with City Council President Ceasar Mitchell, the 15 members of the Atlanta City Council and municipal court judges. Among the council members taking office was Alex Wan, who became the first openly gay man and Asian American on the council. 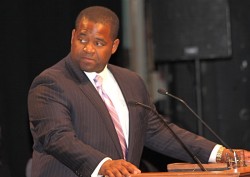 But it was Mitchell (bottom photo), who enjoyed strong LGBT support during his campaign, that talked less of specific policy proposals like Reed and more of the city’s “authentic diversity.”

“We have grown and evolved into a diverse community of peoples of all races, ethnicities, religions, orientations, persuasions and perspectives hailing from all around the country and indeed, the entire globe,” Mitchell said. “It is this authentic diversity which has helped Atlanta stand as a tall and sturdy oak in the walled forests of civil and human rights, community empowerment, economic progress, civic partnership and everything in between.”

Mitchell also included Cathy Woolard in a long list of former city leaders he credited with plowing a path of progress. In 1997, Woolard unseated a longtime incumbent and won the District 6 seat on the City Council, making her the first openly gay elected official in Georgia. Woolard went on to become the first woman and openly gay City Council President in 2002.

“When faced with the choice whether to walk against the wind of bigotry or to set sail to the isle of mediocrity, comfort, cowardice and convenience, Atlantans have chosen the difficult and oftentimes unpopular path to find and embrace our better selves, whether it be civil rights, women’s right, gay rights, or issues of basic human dignity. This is who we are, this is from where we’ve come. Where we go from here is up to us and is in our hands – the entire Atlanta community,” Mitchell said.

Mitchell, who held the Post 1 At-Large City Council post, defeated council colleague Clair Muller 55 to 45 percent in the Dec. 1 runoff to become Atlanta’s No. 2 elected leader. He did so while running an inclusive campaign that included appearances at scores of LGBT events during the election cycle, including gatherings of the Atlanta Gay & Lesbian Chamber of Commerce, Atlanta Pride and the dedication of the Phillip Rush Center. He even found time in the closing days of his own runoff campaign to mix with Wan supporters.

For his work and attention, Mitchell received a trio of gay endorsements from Atlanta Stonewall Democrats, Georgia Equality and Georgia Log Cabin Republicans.