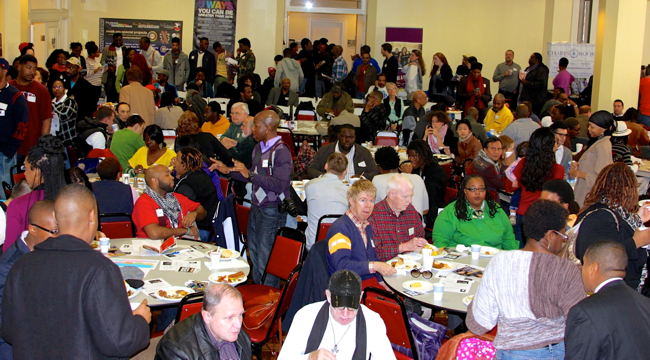 Volunteers whipped up a hearty breakfast that was free to all comers. Guests who dropped by included Indigo Girls’ own Amy Ray and state Rep. Simone Bell, among many others. They were on hand to enjoy this year’s “Reimagine the Dream” program of song, blessings, social justice speakers and lively conversation.

The event was founded in 2002 by Darlene Hudson and Craig Washington with about 20 attendees who then ventured to Atlanta’s annual downtown MLK Day March & Rally. As the event named for gay civil rights activist Rustin and lesbian poet Lorde has grown, so has the LGBT contingent in the march, including the naming of an honorary LGBT Grand Marshal. This year’s honor went to advocate and organizer Cortez Wright.