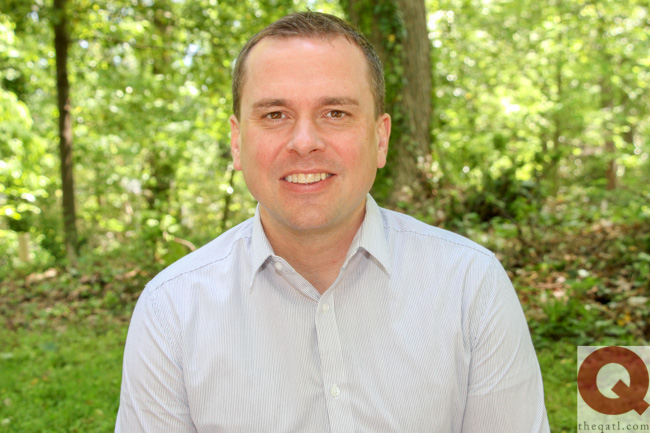 Saunders most recently served as editor of the LGBT media outlet Georgia Voice. He started in his new position with Project Q on April 30 and jumped in head first, breaking the story of a DeKalb judge and former state lawmaker coming out as LGBT and exposing the anti-gay past of a Democratic candidate for the Georgia Senate.

Readers of the site, Saunders said, will see more coverage like that.

“Readers can expect a relentless pursuit of what’s really going on in this city’s LGBT community, especially when it comes to news and politics,” Saunders said.

“Everyone’s bombarded with information on a daily basis, so we’re going to give you only the stories that will affect your daily life, that will make you think, that will make you smile or that will move you to action. I also want to give readers a front-row seat to the events that affect us,” he added.

In addition to sharing those stories on Project Q, Saunders said he'll also utilize the site's social media channels – including Facebook, Instagram and Twitter – as well as newer tools, such as Facebook Live and Periscope, to reach readers.

Saunders is a 2002 graduate of the Grady College of Journalism & Mass Communications at UGA, where he was also a columnist for the Red & Black. He turned to journalism in 2009 with a freelancing gig covering LGBT issues for Creative Loafing, before going fulltime with Fenuxe magazine when it launched in 2010. He later freelanced for Project Q and other media outlets before being hired as deputy editor of Georgia Voice in 2014 and promoted to editor in 2017.

“We're excited to have Patrick join our team. He's a talented journalist and brings with him experience and community-wide respect from several years in the trenches covering LGBT news and issues,” said Matt Hennie, founder of Project Q Atlanta.

“Patrick and I have been there side-by-side covering many important LGBT news events, legislative hearings, protests and vigils over the years. I've seen how he works and I couldn't be more pleased to be working with him instead of competing against him,” Hennie added.

Saunders said a friendly rapport with Hennie and Mike Fleming, a co-publisher of Project Q, helped convince him to come on board as editor.

“We’re definitely of a similar mind on how this kind of work should be done, and I’ve admired how the blog has evolved over the years into what it is today: a community-focused, hard-hitting LGBT news, culture and entertainment source that’s embedded deep into the fabric of this city. And the introduction of Q Magazine last November was a big factor as well — it’s beautiful, diverse and necessary, so getting in with this team during such an exciting and productive time as Project Q approaches its 10th anniversary was too good to pass up,” Saunders said.

Saunders is just the second editor of Project Q Atlanta since it launched in September 2008. He succeeds Hennie, who will now oversee business development and sales for both Project Q and Q magazine.

Q, a weekly glossy print magazine covering LGBTQ issues, premiered on Nov. 16. It is published by Hennie; Fleming, who also serves as the publication's editor; and Richard Cherskov, an LGBT entrepreneur who recently bought Midtown Tavern and relaunched it as an LGBT space.

Saunders said joining Project Q and continuing his career in the region hits home for the metro Atlanta native.

“Atlanta is definitely a city of transplants, especially as it’s grown so fast over the past 10 or 15 years. It’s a source of pride for me to say I live here and came from here. This city and its people have been there for me for all of it, since I was a scared, closeted kid to a way out and proud gay man,” Saunders said.

“It’s so exciting for me to continue my career here and work in Atlanta’s LGBT community, especially considering the city’s iconic role in the African-American Civil Rights Movement. Some of those same tactics are being employed in our fight today, some of those same heroes stand right beside us for it all and I couldn’t be more proud to be right in the middle of it,” he added.