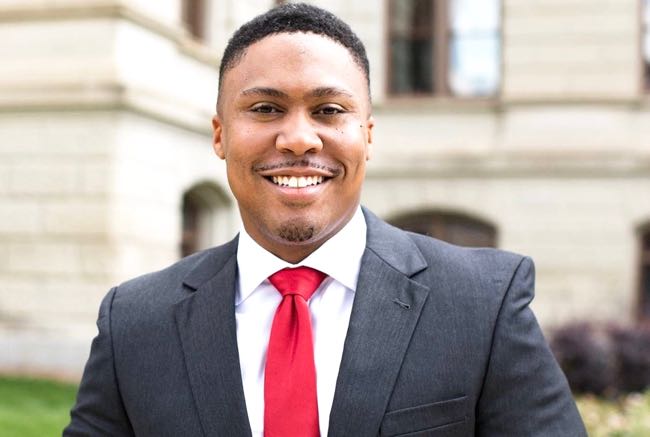 Josh McNair, a sales representative and gay Morehouse graduate, is speaking out about his leadership style, policy priorities and how he’ll fight for Fulton County as he runs in a crowded race to replace a beloved LGBT figure on the county commission.

McNair, 32, formally stepped into the District 4 race in June. The West End resident – he lives there with his partner – is a sales representative for Monogram Biosigns, a company that specializes in diagnosing HIV, Hepatitis C and other viral illnesses. He recently spoke with Project Q Atlanta about the campaign, his leadership style, how the county can better address the HIV epidemic, and what it will take to fill the shoes of Joan Garner, the first openly LGBT person elected to the commission.

Garner died in April, setting up the special election for the remainder of her term on the commission.

“I think because I professionally work in sales, one of the things I learned very early on in my own career is to like sit back and listen, don’t be on your own agenda, understand why people feel the way that they do. And I think that is the heart of part of why I am running as well is that I have always been a servant of people,” McNair said.

Garner died after a long battle with cancer, ending her decades of activism on public policy issues, including LGBT equality and healthcare, and social justice work. McNair discussed Garner’s legacy and his hope to follow her onto the commission.

“She was the first [out] LGBT person to be elected to the Fulton County Commission. And as someone who is also LGBT and also an African American, you know, I fill with pride, I feel very proud of when she was elected in 2010,” McNair said.

“They are huge shoes to fill, but I am more than capable and more than ready to fill them,” he added.

McNair said it is important for leaders to be their “authentic self” and share his own experiences of coming out. He also said his leadership style, and not his identity, matters most in this race.

“I think that’s so important of leaders to be your authentic self, to have no shame in who you are, in who you love, and who you happen to choose to grow a life with,” McNair said.

“I know how it felt to be feeling like I was living in a prison, and to feel as though your family won’t accept you,” he explained. “I have absolutely no shame in saying that I am a gay man, and that I am a gay black man at that, that I am open, that I am honest about who I am. But at the end of the day, you know, who I love and who I choose to build my life with should not matter and does not matter when it comes to fighting for the issues of everyone within this particular district, within my neighborhood, wherever it may be that I am working.”

McNair is one of six candidates in a crowded field that also includes one other LGBT candidate ­– Reese McCranie, the policy and communications director for Hartsfield-Jackson Atlanta International Airport and a former top aide to Mayor Kasim Reed who announced his campaign on Friday. Others include Natalie Hall, Garner’s former chief of staff and wife of Atlanta City Council member Kwanza Hall; Atlanta School Board member Steven D. Lee, Sr.; Eddie Lee Brewster; and Realtor Kathryn Flowers Glasco.

On Aug. 23, McNair picked up the endorsement of the Victory Fund, a Washington, D.C.-based organization that supports LGBT candidates and elected officials. The group is “thrilled” to back him, according to Alisha Moodie-Mills, Victory Fund’s president and CEO.

“Josh’s commitment to smart public policy that addresses the real concerns of constituents makes him the best candidate for county commission. When he wins in November, Josh will become a vital LGBTQ voice on the commission,” Moodie-Mills said in a prepared statement.

McNair said the endorsement shows that he’s committed to supporting LGBTQ residents in the county.

“I’m grateful to have the endorsement of Victory Fund. As county commissioner, I pledge to continue to the fight for LGBTQ Fulton County residents for health services.” McNair said.

Fulton County is also at the center of an HIV epidemic that includes some of the highest new infection rates in the U.S. McNair said it’s critical that the county continue to address its HIV problem and support the Fulton County Task Force on HIV/AIDS, which recently ended its work and issued a final report before being replaced by the HIV/AIDS Prevention, Care & Policy Advisory Committee.

“Some of the things that I definitely want to make sure that we’re focused on are the staggering HIV rate that are happening in the county,” McNair said.

“We have to make sure that we are continuing the work of the HIV/AIDS Task Force, the good work that they are doing, and making sure that we continuing to focus on that and dedicate resources to that to help eradicate that problem,” McNair added.

Economic development is another important policy area for McNair. He explained that the county and the city could work better together on this issue. Since the City of South Fulton was created earlier this year, Fulton has become divided almost entirely into cities.

“The county and the cities throughout the county could do more to help with economic development,” he said. “Working together, to use our tax dollars to make things better — you know provide better quality services for our citizens — by working more as a cohesive unit as opposed to working in silos.”

McNair also discussed the diversity of District 4 and his desire to make Fulton a place people are proud to call home.

“I hear often this whole tale of two Atlantas, and I think we do a disservice to the future of this city when we are not focused on every resident no matter their income is, no matter what their socioeconomic status is, we have to make sure that every resident in the county of Fulton is thriving,” he said.

“I am ready to win, to fight for Fulton, and to be a great District 4 commissioner,” he added.

The special election is Nov. 7.