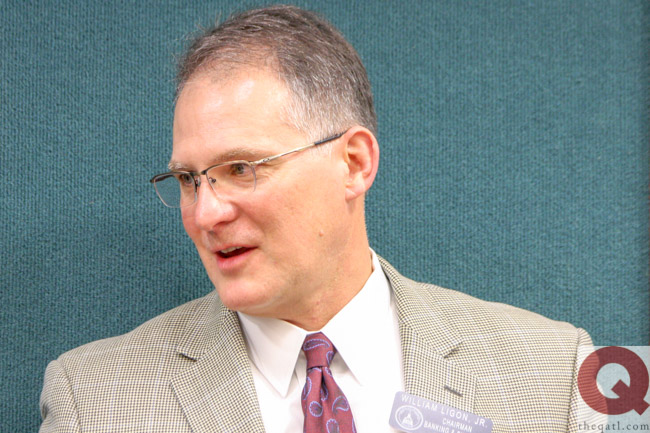 A “religious freedom” bill that would allow faith-based agencies to receive public funds and ban adoptions by LGBT people and others cleared a key subcommittee in the Georgia Senate despite staunch criticism and concerns about its legality.

The hearing by the Senate Judiciary subcommittee on Thursday came just a week after Sen. William Ligon introduced Senate Bill 375, which is titled the “Keep Faith in Adoption & Foster Care Act.”

The legislation reignited a long-running debate in the legislature over anti-LGBT “religious freedom” bills. Ligon framed the issue as protecting faith-based adoption and foster care agencies from being penalized for their “sincerely held religious beliefs.” Critics said the bill would provide taxpayer funds to agencies that are already legally allowed to discriminate against LGBT people, single parents and those that aren't conservative Christians.

“We've seen at least three states take adverse action in saying that if you don't violate your beliefs, then we are going to force you to go out of business and that choice is put to them. You either violate your conscience or you can't serve children,” Ligon said.

Ligon (top photo) was clear that his bill was a response to the U.S. Supreme Court decision in 2015 legalizing gay marriage in Georgia and across the country.

“Frankly, the issue centers around the views of marriage. With the Obergefell decision, the Supreme Court has declared that same-sex marriage is a right and that is recognized. But that decision also stated, recognized that there are going to be different views of marriage and that some may not agree with it,” Ligon said.

“We're going to have to find ways, if we're going to live in a pluralistic society where our different views can be respected and honored, we can work together for the good of society,” he added.

Ligon's bill would allow faith-based agencies with mission statements that ban serving LGBT people and others to receive state contracts to place foster children and handle adoptions. The legislation would also prevent those groups from facing any penalties by state agencies if they refuse service to people based on sincerely held religious beliefs.

“This is not saying that same-sex couples could be denied the adoption of a child, or that agencies that specialize in adoptions by same-sex couples should not be able to operate in Georgia. They should and there are ones that do,” Ligon said.

“You can go on the Internet and see that there are a variety of agencies with mission statements, some faith-based, some aren't. We just want to ensure that all are included and that all are allowed to participate in this process,” he added.

Critics of the legislation testified during the hearing that the bill would open the door to discrimination against LGBT people and would harm LGBT children facing adoption or foster care.

“Heaven forbid a trans kid or a gay kid should be placed by an agency that thinks gay people are evil or that gay people can't be legitimate parents and refers them for reversion therapy for God's sake, which is damaging and destructive,” LaRocca-Pitts added.

Sean Young, legal director for the ACLU of Georgia, said allowing agencies receiving taxpayer funds to discriminate based on religious beliefs likely violates the Establishment Clause of the U.S. Constitution.

“This bill allows someone else's interpretation of scripture to dictate whether I can provide a loving home to a child who needs it, which is the epitome of Christ-like love,” said Young, who also identifies as a gay Christian.

“It's like the government is telling me that I don't count, that my religious journey doesn't count, and that other people's religious beliefs are superior to who I am and everything that I've been through,” he added.

Jonathan Rogers, a volunteer with the Anti-Defamation League, called the legislation “grossly unfair.”

“Neither Georgia nor its taxpayers should be supporting discrimination in any form. The publicly funded discrimination authorized by Senate Bill 375 is not only grossly unfair but in certain circumstances will likely violate federal law,” Rogers said.

“Allowing these families and individuals to be excluded from the pool of prospective parents for discriminatory reasons is harmful to the children in care and forces taxpayers to foot the bill with higher overall costs to the State of Georgia,” Graham said.

“Do we really want to create a system where children who have already seen hardships in their life and need great love and support of others to be risked being turned away, shamed or stigmatized by the very agencies that are funded by state taxpayers to help them,” Graham added.

'The biblical view of the family'

Supporters – including Tanya Ditty, state director of Concerned Women for America – said that faith-based agencies are the ones facing discrimination and that the bill is a “common sense, proactive piece of legislation” to prevent that.

“I wonder how it long it will be until people like my parents – ones of faith and who believed in traditional marriage – will be denied the opportunity to foster or adopt children,” Ditty said.

Mike Griffin, a lobbyist for the Georgia Baptist Mission Board, said the bill is an effort to combat the “hostility” that faith-based agencies face in Georgia.

“The biblical view of the family – and really when you think about it, that's really what is at issue here,” Griffin said.

“In our country, we still respect faith groups and their responsibility to be able to believe what they believe about the biblical view regarding the family. We believe that such official hostility to religious organizations is contrary to their ability to uniquely contribute to the pluralism of American society by their religious activities,” he added.

Jane Robbins (second photo) with the American Principles project said the bill sends an “unambiguous message” that lawmakers will protect “religious freedom” and not “subordinate it to other demands.”

“If we as a state decide not to protect faith-based child placement agencies but rather force them to violate their sincere religious principles upon which our society has rested for millennia, we are saying those principles are so bigoted and so unacceptable in our current society that we just can't allow them to be part of any consideration,” Robbins said.

Paul Smith – the founder of Citizen Impact, which advocates for “religious freedom” legislation – said the legislation would help expand the number of agencies handling adoptions and foster care and dismissed concerns that it would prohibit LGBT people and others from taking part.

“We don't believe that it restricts the opportunity to adopt any more than a sporting goods store choosing not to sell handguns restricts my Second Amendment rights,” Smith said.

Dave Baker, executive director of the Faith & Freedom Coalition of Georgia, argued that since LGBT people are able to adopt and foster children, it's fair to protect the ability of faith-based agencies to do the same.

“It is not asking too much therefore, to allow a relative handful of faith based agencies to adhere to their sincerely held religious beliefs in placing children just with traditional families. Fair is fair,” Baker said.

The 90-minute hearing on Thursday was the first legislative action on the bill since Ligon introduced it on Feb. 1. The Republican from Brunswick pledged to introduce the measure in January after the anti-LGBT language was removed from a sweeping reform of the state's adoption and foster care laws.

Ligon and other Republican members of the Senate Judiciary Committee hijacked the bipartisan reform bill last March and added the “religious freedom” amendment. That language tanked the bill in the closing days of the 2017 legislative session.

Sen. Josh McKoon – the anti-LGBT lawmaker who has pushed for “religious freedom” measure for several years – chaired the subcommittee, which also includes Sen. Greg Kirk. In 2016, Kirk sponsored “religious freedom” legislation that turned into a sweeping anti-LGBT bill that lawmakers approved. The bill sparked a national outcry and an eventual veto from Gov. Nathan Deal.

Sens. John Kennedy, a Republican, and Harold Jones, a Democrat, are also members of the subcommittee and took part in the hearing.

McKoon said the panel wouldn't vote on the bill but that the hearing made the legislation available for the full Senate Judiciary Committee to take action. Sen. Jesse Stone, the Republican who chairs the committee, said after the hearing that he was going to huddle with members of the panel before deciding when it would be scheduled for a vote. Stone supported Ligon's amendment last year.