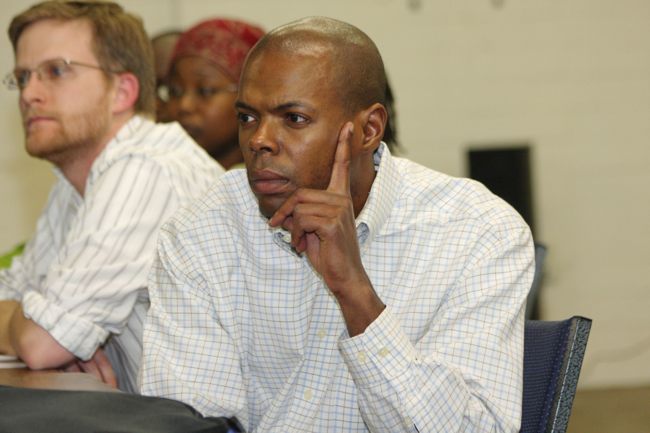 A group of more than 50 people on Tuesday debated how the LGBT community should respond to the anti-gay beating of an Atlanta man caught on video.

The nearly two-hour session featured a mostly African-American group of LGBT activists that spanned grassroots groups, HIV agencies and religious organizations who plotted a public response to Saturday’s beating of Brandon White by gang members outside a grocery store in Southwest Atlanta.

“We want to show our strength in unity and our strength in numbers,” said Adolph Arromand (top photo), who is organizing a rally on Saturday with Devin Barrington-Ward in the Pittsburgh neighborhood where the attack took place.

But other participants in the meeting, led by Arromand, Barrington-Ward and longtime LGBT activist Darlene Hudson, questioned the goals of a rally and a press conference set for Wednesday. The HIV Intervention Project announced Tuesday that it was holding the media event with White to provide his first chance to speak out about the attack. 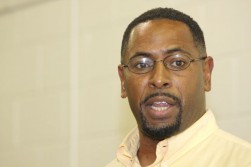 Greg Smith (second photo), HIP’s executive director, passionately defended the press conference as a way to provide for White to respond to questions about the incident in a controlled environment. Otherwise, Smith said, the media will continue to pursue him.

“He doesn’t see himself as having a voice,” Smith said. “Tomorrow we will give him a voice.”

But some participants at the meeting, which was held at the Rush Center on DeKalb Avenue, asked if it was safe for White to speak out. Atlanta police said Tuesday that they are making progress in the case, though no arrests have been made. Several people were involved in the attack on White, showering him with punches and kicks and throwing a tire on him as a few onlookers watched.

But Smith said that White — who he described as unemployed, without a car and living in the neighborhood where he was attacked – can’t hide.

Activists at the meeting took up a collection for White so he could replace his cellphone, which was stolen in the incident, and to help with other expenses.

Barrington-Ward said that the safety of White and participants in the rally on Saturday is an issue they are addressing. Organizers hope to have a police presence at the event.

“The attack was so brazen, so visibly displayed and I wanted to make sure we weren’t hitting the streets as a community in unsafe areas,” he said.

Josh Noblitt, a social justice minister at Saint Mark United Methodist Church who was attacked in Piedmont Park in 2010, said that rally organizers should spell out clear goals for the event.

“Is the rally for the young man or for what,” Noblitt said. “If it is not for him [we need] to articulate what this rally is about. Is it for the Pittsburgh community, the black queer community? Name that up front and stick to it.”