Johnston hit the interview circuit before the shoot. They, and we, just can’t seem to resist reports on this hot, dumb Himbo and his 15 minutes of fame. No matter how much we want to stop writing about it, Levi invades our consciousness at every turn. 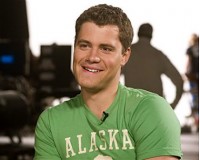 “I’m as ready as I’ll ever be,” the Alaskan bumpkin tells Life & Style of the photo shoot that follows weeks of intense workouts and a diet plan that Country Boy admits he’ll break with a cheeseburger as soon as shooting wraps.

Much more verbose is Daniel Nardicio, the former gay sex-party planner tapped to “save Playgirl” by playing to the magazine’s gay fanbase.

“It’s going to be glamorous. I wanted to revamp the magazine’s image, and Levi’s contemporary, hot, athletic and controversial,” he tells Life & Style.

Let’s just leave it at “hot,” Daniel. Levi’s first foray into “athletic” was for Playgirl, and his only “controversy” is seeing exactly how much he can embarrass Sarah Palin’s family at every turn. Reminder for those of you not attached to this story at the hip: Johnston is the unwed teen father of the former VP candidate’s grandchild.

With Nardicio and Bravo’s Andy Cohen leading the charge, that gay fanbase is growing exponentially. And Johnston’s fine with that.

Icon? No, Levi; you’re just young and dumb–the way we like our eye candy. But thanks for playing.

In the interviews leading up to the Friday-through-Sunday photo sessions, Levi makes his lack of vocabulary and inability for coherent thought apparent.

“You’ll be seeing a lot of me,” he told Sirius XM radio’s gay duo Derek and Romaine.

Ya think? Maybe it’s not a lack of intelligence, but a strong way with understatement… Naw! 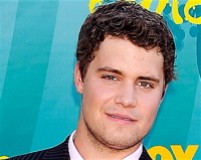 Poor Levi. He thinks the fleeting attention could lead to a better life.

“I could go out and do movies, maybe one day even end up as a celebrity,” he says. “If it doesn’t work out, I’ll just go back to being a licensed electrician like everyone else in my family.”

We’re thinking “Plan B,” but dare to dream, kiddo!

“He did a remarkable job of not saying much,” says a reporter for Gawker of the short interview snatched in the middle of Levi’s media throng at the Fleshbot awards.

That’s not hard to believe. Here’s video of his inspiring acceptance speech with the evidence: