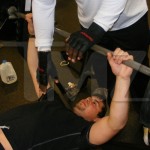 Sarah Palin’s grandbaby daddy Levi Johnston is enduring three-hour sessions in the gym to prepare for Playgirl, but is he concerned that he won’t measure up down below? We have video.

OK, not that kind of video; don’t get too excited. But even through his sweats in the video below, we can tell he’ll be able to answer “Where’s the beef?” when it comes to his arms and chest.

But is Levi more worried about “Where’s the sausage?” Now we’re not ones to go around spreading rumors… Who are we kidding? Of course we are!

Rumor has it that Johnston has questioned his own nether region shortcomings so much that he and his camp are considering a No Full Frontal policy at the shoot. Paqe Six started it with a claim that an ice-rink portion of the shoot wouldn’t help matters, and it seems everyone else in the big gay blogosphere is weighing in. Yes, us too. You know you love it. 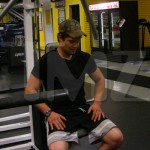 Gawker has the funniest ongoing coverage of Johnston’s rumored “issues,” and is actually taking bets as to whether we’ll get to see Little Levi at all when the Playgirl issue hits next year.

His trainer Tank, who we showed you asking Johnston about his Johnson last month, denies that the conversation has ever come up. That’s just a damn lie. Click the first video in the link to see the evidence.

Tank (photos, with Johnson from tmz.com) has both confirmed that there will be frontal nudity in the Playgirl shoot and refused to answer the question in recent weeks. 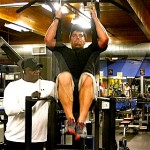 Not that we expect smart answers, or even the truth, from either of them. We just want to see the goods!

Meanwhile, Johnston and his baby granny have exchanged a few choice words about the Playgirl shoot, including Palin calling him “desperate.” Ouch. But Johnston says Bristol Palin (the erstwhile “Baby Mama”) isn’t giving him any problems about it or his visitation with their son, Tripp.

Speaking of someone who’s always tripping, the otherworldly Mary Hart does the voiceover for Johnston’s “No Cheeseburgers” and “Working out is hard” video clip: