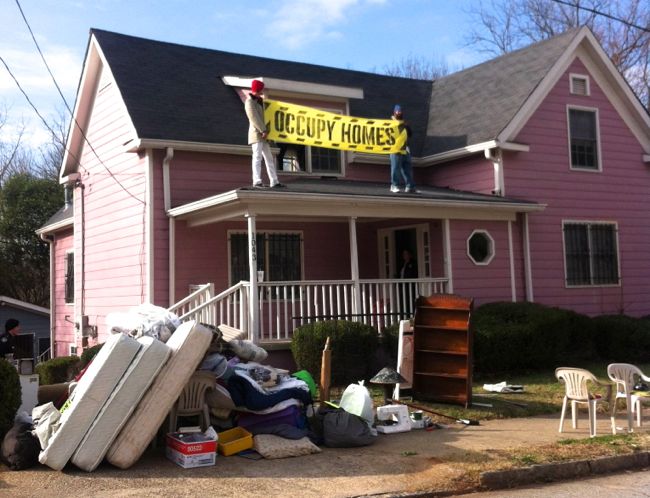 The saga of a homeless lesbian couple with two children grew worse on Wednesday when Atlanta police arrested them after they refused to leave a place they called home since last week. The hitch is that the pink bungalow in southwest Atlanta’s gritty Pittsburgh neighborhood wasn’t their place to occupy. But they moved in last Thursday after a highly-publicized rally, march and assistance from Occupy Our Homes Atlanta. The foreclosed home’s current owner, New York-based M&T Bank, blinked on Wednesday. They served Renika Wheeler, her two children, and her partner, Michelene Meusa, with a criminal trespass warning. They refused to leave. Atlanta police, taking a wait-and-see approach since last week, then played its hand, according to Creative Loafing.

An APD spokesman says the bank that owns the home "issued a criminal trespass warning" this afternoon to the family of four who occupied the house on Windsor Drive in the Pittsburgh neighborhood. Renika Wheeler, one of the occupants of the house, was arrested for criminal trespassing after she refused to vacate the property. Three others, including Wheeler's partner Micheline Meusa, were later arrested on the same charges. The APD spokesman says representatives from the Pittsburgh Community Improvement Association, a nonprofit developer of affordable housing which serves as the community's de facto neighborhood association, were on hand to help find the other three family members find a "safe place to stay."

Occupy Our Homes alerted supporters to the eviction on Wednesday and asked for donations to its bail fund to help get those arrested out of the Fulton County Jail. “Of all of the things we’ve gone through the last seven months, that was all in God’s will for us,” Wheeler said during the Dec. 6 takeover of the house (video below). “It may have been hard, it may have been tortuous. But we made it through and [God] has assigned us to something else. And that is home liberation.” M&T Bank knows a thing or two about tough times and Atlanta gays. The bank loaned millions of dollars to gay media company Window Media before that company collapsed into bankruptcy in 2009. When the former publisher of Southern Voice and David closed, it owed $1.28 million to M&T. Last December, Occupy helped a lesbian veteran remain in her Riverdale home. Photo via Occupy Our Homes ATL