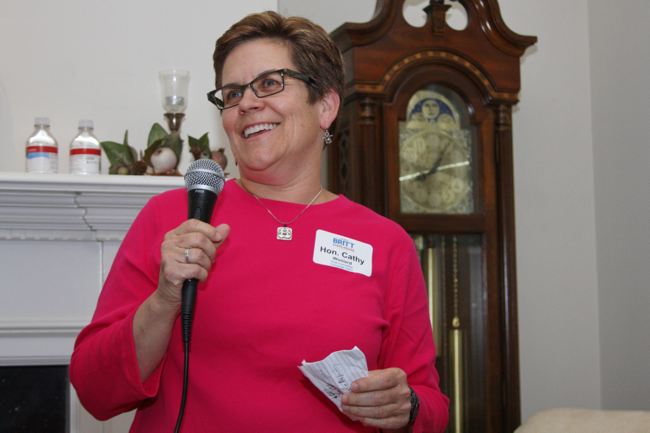 AID Atlanta, pushing to reach an elusive $1 million fundraising mark for its signature AIDS Walk, tapped a longtime LGBT activist to lead the non-profit as it looks to fill a vacant executive director position.

The non-profit’s board on Tuesday announced that it named Cathy Woolard as interim executive director. The LGBT activist, lobbyist and former elected official fills a position left vacant since June when Tracy Elliott resigned. A few weeks later, one of three AID Atlanta officials named to lead the agency, Jon Santos, also left.

Along with Woolard’s hiring, the agency also announced a grant it received from the Community Foundation for Greater Atlanta to study the changing landscape for AIDS service organizations. AID Atlanta did not provide the amount of the grant, Woolard’s salary or details on how long she will serve as interim executive director.

“I’m very excited to work with the board and the management team of AID Atlanta during this pivotal time of transition for the agency,” Woolard says in a prepared statement. “Our fundraising efforts remain strong and we’re going into 2013 with confidence.”

Woolard has carved out a niche as a lobbyist for progressive causes at the Gold Dome since she stepped out of the political arena after losing a 2004 Congressional bid. She’s served as part-time lobbyist for Georgia Equality for at least two years.

In 1997, Woolard unseated a longtime incumbent on the Atlanta City Council to become the first openly gay elected official in Georgia. She went on to become the first woman and openly gay City Council President in 2002 and was later mentioned as a possible mayoral candidate. Woolard has also served as executive vice president for Global Advocacy & External Relations at CARE.

In 2010, Woolard served as chair of incoming Mayor Kasim Reed’s search for a public works commissioner. Also in 2010, Woolard was named one of 120 grand marshals of the Atlanta Pride parade. Last year, she was mentioned as a possible hire as executive director of the Human Rights Campaign.

AID Atlanta is closing in on raising $1 million from its AIDS Walk in October, a tally it hasn’t reached in several years. Donations are being accepted until Nov. 30.

Board Chair Mark Rinder says Woolard and the grant will benefit the search for a permanent executive director.

“This is an exciting time for AID Atlanta,” Rinder says in a prepared statement. “In its 30th year and under new leadership we’re embarking on an assessment to determine the strengths needed in a permanent executive director.”

The full announcement from AID Atlanta:

The board of directors of AID Atlanta is thrilled to announce that it has named former Atlanta City Council President, Cathy Woolard, as interim executive director. She brings extensive non-profit executive management expertise as well as a broad knowledge of the city’s corporate and civic leadership. She will continue to maintain the client base at her public affairs company while she leads the organization in its 30th year. AID Atlanta also announces that it was awarded a grant from the Community Foundation for Greater Atlanta to fund an organizational assessment to study the changes in the AIDS service organization landscape, which it expects will inform its search for a permanent executive director.

“This is an exciting time for AID Atlanta. In its 30th year and under new leadership we’re embarking on an assessment to determine the strengths needed in a permanent executive director,” said Mark B. Rinder, chairman of the board of directors of AID Atlanta.

“I’m very excited to work with the board and the management team of AID Atlanta during this pivotal time of transition for the agency,” said Woolard. “Our fundraising efforts remain strong and we’re going into 2013 with confidence.”

Woolard is a familiar face in the Atlanta non-profit arena. In addition to her role in public office, Woolard has provided public affairs consulting and interim executive management for a number of organizations including the Human Rights Campaign, League of Conservation Voters Education Fund, Metro Atlanta Arts and Culture Coalition and Planned Parenthood of Georgia. She also held the position of executive vice president, global advocacy and external relations at CARE. Woolard currently serves on the boards of Atlanta BeltLine, Inc. and the Atlanta Medical Center.

AID Atlanta saves and transforms lives with a continuum of care that provides Access, Linkage, and Retention to HIV care. The continuum begins with proven effective HIV prevention programs that avert new infections, encourage HIV testing and promote early HIV diagnosis. Newly diagnosed individuals are linked to primary health care and a comprehensive suite of programs that work in concert with one another to improve health, provide basic needs, address mental health issues, and improve quality of life. AID Atlanta programs are proven effective at improving health outcomes as measured by reduced viral loads and higher CD4 counts, the two key indicators of health for those who are HIV-positive. For more information, visit www.aidatlanta.org