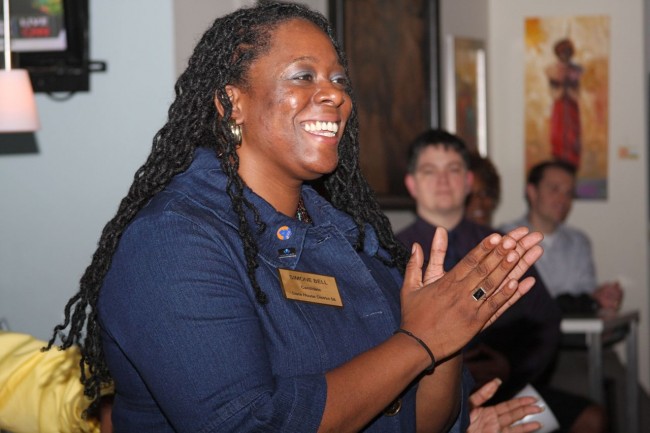 Georgia voters showed once again Tuesday that lesbian candidates have mastered the playbook for winning elections. Gay men? Not so much. Welcome back to the Gold Dome, state Rep. Simone Bell. Bell (photo) secured a second full term on Tuesday by thumping token Republican opposition from Earl Cooper, 87 to 13 percent. Bell, one of three lesbians in the state House, won a contentious Democratic primary in July. Bell thanked supporters in an email early Wednesday.

My heartfelt thanks go out to you -- my friends, family, volunteers, supporters -- and especially to the people of District 58 who on Tuesday affirmed my desire to continue serving the people of Georgia as a state legislator.

Thanks to all the voters for supported my campaign for Georgia House District 101; and to all those who participated in the election process regardless of who you supported. I congratulate Dr. Valerie Clark on her re-election and extend my appreciation for her class and integrity in running this campaign. Good luck and best wishes.

Riley’s race wasn’t even close – he lost to GOP state Sen. Frank Ginn 67 to 33 percent. Riley said with the race now over, he was ready for a white chocolate mocha coffee.

Even though I lost my race tonight we made significant increases in our vote totals. We increased our vote totals literally by the thousands as well as many percentage points!!! It was because of the love and trust you placed in me. You held me up when my opponent was rude, hateful and attacking my personal life. You loved me, prayed with me, called me, texted me and hugged me. It is really quite overwhelming how wonderful that feels.

The phone calls, text messages, wall posts, messages and emails have been truly overwhelming today. Thank you so much for your support!

I didn't win my friends, but what an incredible journey this has been! Let's re-elect President Obama!

In July, voters turned out state Rep. Rashad Taylor in his first election since coming out as gay. Ken Britt, a longtime LGBT activist, and gay former Marine William Phelps also lost their bids for the state House.