Lesbian wants all of Atlanta to eat her sausage 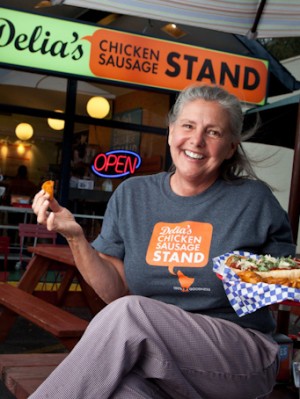 Delia Champion has made some tasty biscuits in her day. And now the lesbian restaurateur is grabbing her chicken sausage with both hands and making it grow so more Atlantans can taste a mouthful. Champion, once the proud owner of the original Flying Biscuit, is expanding her Delia’s Chicken Sausage Stand to a second location early next year. Looking at you, intersection of Northside Drive and Marietta Street in West Midtown. Taste the sausage. Taste it. From Eater Atlanta:

A second Delia's Chicken Sausage Stand will start slinging sausage rolls at the intersection of Northside Drive and Marietta Street early next year. Delia Champion of the Flying Biscuit and Molly Gunn of the Porter Beer Bar opened their first stand in 2008 on Moreland Avenue in East Atlanta.

Champion sold Flying Biscuit in 2006 and launched Delia’s in East Atlanta with business partner Gunn in 2011. The eatery provides a tasty, guilt-free chicken alternative to Chick-fil-A and even does so on Sundays. Photo via Delia’s Chicken Sausage Stand