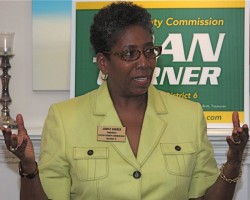 One thing is for certain: After Tuesday’s runoff, the Fulton County Commission will get its first openly lesbian member. But whether it’s Keisha Waites or Joan Garner, well, that’s up to you the voter.

“I just want to thank everyone who supported my campaign, who supported me and who has supported me over the years,” Garner said a day after the primary. “They know that I carry our issues with me wherever I go. I appreciate the support and I’m asking for their continued support, and I know that they’ll help me get the victory.” 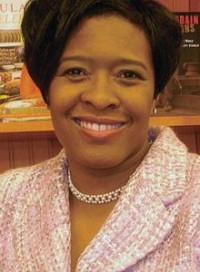 Waites (second photo), who has run for office seven times since 2001, didn’t pick up the endorsements of any LGBT groups, has mostly avoided interviews with gay media outlets and hasn’t publicly courted LGBT voters. She did pick up the endorsement of the Atlanta Progressive News, which is run by gay activist and journalist Matthew Cardinale.

“I’m proud of every race I’ve been in and I believe it shows I’m committed to the process and have a strong desire to serve,” Waites told the Georgia Voice shortly after qualifying for this year’s ballot.

Creative Loafing took issue with that in a recent post on its Fresh Loaf blog, calling Keisha Waites the “wrong person” for the county commission.

After talking again with Waites recently and conferring with other community members who know her, I remain convinced we hadn’t simply caught her on an off day. She describes her forceful personality as “having a lot of heart”; to me she seems to be a person with a sizable chip on her shoulder but few real qualifications.

Waites has yet to spell out where she stands on some specific LGBT issues, including same-sex marriage. Garner, who served on the transition team of Mayor Maynard Jackson and was later appointed his senior advisor on gay and lesbian issues, supports a state hate crimes law, workplace non-discrimination protections and repealing the state’s constitutional ban on same-sex marriage. She also backs gay adoptions and same-sex marriage.