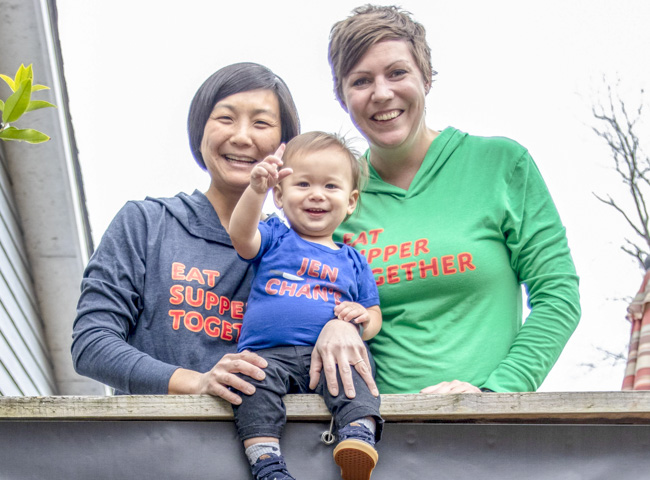 Jen and Emily Chan are expanding their “mostly Southern, mainly Asian” food delivery club to a full-service restaurant in Cabbagetown.

The couple are aiming for a mid-September opening of JenChan’s in the former Mouth of the South space at 186 Carroll Street.

“We already have our Department of Agriculture license, so we’re currently cooking and we can open as a market,” Emily Chan (photo right) told Project Q Atlanta. “And we’ve put in our application with the Department of Health and we’re awaiting inspections and that could take two to three weeks. We’re hoping for the earlier end of that.”

The market area will be about 300 square feet and there will be 600 square feet of seating space plus a bar, according to Emily. The restaurant menu will remain similar to the supper club’s, which includes spare ribs, chicken wings, rice noodles, egg rolls and stuffed mushrooms. It will also include “Mik’s Pick,” courtesy of the Chan’s infant son (photo center).

The couple started JenChan’s Supper Delivery Club in January. Emily has been a restaurant consultant, a GM for Flying Biscuit and she’s worked for Mellow Mushroom’s corporate office. Jen (photo left) is the beverage manager for Ford Fry Restaurants.

They operated the supper delivery club out of a shared commercial kitchen space near the I-85 and I-285 interchange in northeast Atlanta.

“Being out that far on 285 just didn’t feel authentic to us,” Emily said. “We live in Reynoldstown, which is essentially Cabbagetown. We wanted something hyper local and that just wasn’t doing it for us.”

Emily said she’s had her eye on the Mouth of the South space “since three generations of restaurants ago.” They moved quickly once they heard it was closing.

“I texted [restaurant consultant] Todd [Semrau] and I was like, ‘Get me that space!,’” Emily said.

The Chans will be conducting interviews for front-of-house and back-of-house positions on Thursday at the restaurant, according to a post on their Instagram page.

They posted a video update to Instagram on Aug. 12 showing the renovation progress.