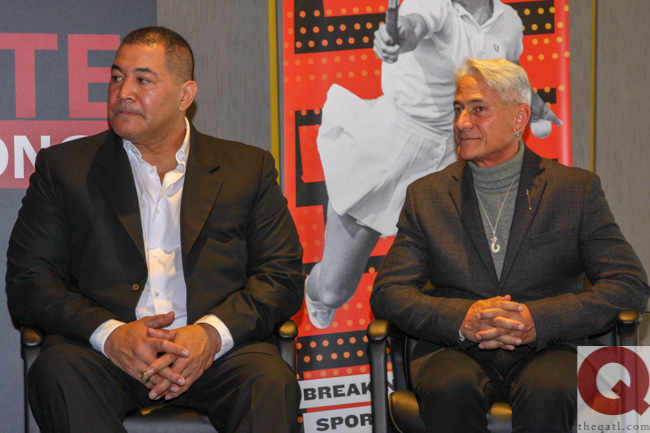 The Super Bowl Inclusion Panel took place Tuesday at the Center for Civil & Human Rights. It was organized by Esera Tuaolo, a former Falcons player who came out after he retired. Tuaolo now champions diversity in sports and fights bullying among youth through his nonprofit Hate Is Wrong. Tuaolo hosted a Super Bowl Inclusion Party later that evening (view photos) at Buckhead Theatre.

Katie Sowers, an assistant coach for the San Francisco 49ers, was a scouting intern for the Falcons in 2016. She talked about using humor and levity when homophobic statements were made in front of her.

“We can get mad at people, but getting mad at them is not going to change them,” Sowers (second photo) said. “The more that we can understand and try to teach and try and help the ignorance, the better off we’re all going to be.”

“What was amazing about it was that, for the first time in a long time, I heard people articulating themselves in that room and using descriptive words and adult words and words that were … just more intelligent,” he said.

“There was a time that the gay word came up, and there was a dead silence. And we talked about it. A lot of it is in the language,” he added.

Many panelists talked about the role of coaches in instituting a culture of LGBTQ acceptance on their teams.

Tuaolo (top photo, left) reiterated how language is a large part of that process.

Pioli was asked by an audience member whether the Falcons would partner with the local LGBTQ flag football league — the National Flag Football League of Atlanta — like some other NFL teams have done with their local leagues.

Pioli said he wasn’t aware there was such a league, but that he’s confident in how the Falcons address LGBTQ issues.

“I know our organization pays attention to things like this, and they wouldn’t allow me to be [at the panel discussion] if they didn’t,” he said.

LGBTQ athletes forced to be courageous

Peter King, an award-winning football writer for NBC Sports, said he knew nothing about LGBTQ culture until one of his daughters came out to the family.

“In the intervening time after Laura came out and after we talked about it an awful lot as a family, I said, ‘Just imagine how much Laura’s life was affected not saying anything for 26 years to the people that she loved,’” he said. “I just always thought we need to make it possible for everybody to talk about this openly.”

He devoted one of his columns to Laura’s marriage to her wife, leading to “about 650” emails that included only three homophobic responses.

“It was one of the most encouraging things in my entire career,” he said.

King said there must be LGBTQ players currently playing in the NFL, but he doesn’t know who they are.

“The one thing I don’t like is it creates a false sense that there are no gay players, and if there were, then they shouldn’t come out,” he said. “I just think it’s incredibly sad. There shouldn’t be any reason why anybody would care.”

“I think that we as a society don’t even understand the things that we teach our children,” she said.

Odessa Jenkins, co-founder and COO of the Women’s National Football Conference, said that she had no choice but to be courageous to get where she is.

“I’m a little girl from South Central Los Angeles. My passion comes from having the courage to be unapologetically you,” she said. “The world has taught me as a black, lesbian, strong, muscular, bald woman that I needed to be one of two things — my passion is driven from being the thing I decided to be, which is courageous. I learned that from my mother, and that’s taken me a lot of places.”

Greg Louganis, who came out after a legendary diving career, said that younger gay divers who come out during their careers, like Tom Daley and Matthew Mitcham, inspire him.

“I like to think that I kind of paved the way for them to be comfortable with who they are and be visible and not hide in the shadows,” he said. “I think that’s what really keeps me going.”

Louganis (top photo, right) talked about being kept off the cover of a Wheaties box — at one time a high honor for athletes — during his career due to rumors over his sexuality. An online petition in 2016 led Wheaties to put him on a box as part of its “legends” series.

“I thought it was really important for them to say they have a change of heart and they see things in a different light,” Louganis said. “That’s what so important is be your authentic self, be true to yourself, be kind to others and things will turn around.”

Zion Armstrong, president of Adidas North America, said that the duty to be LGBTQ-inclusive extends to the corporate world. The company forbids its athletes from discriminating against LGBTQ people.

“If there is discrimination, we make sure that we can pull out of that contract,” Armstrong said.

Armstrong added that having LGBTQ employee resource groups at the corporate level is an important step too.

“The more they talk about [LGBTQ inclusion], the more it’s embraced,” he said. “A couple years ago, it wasn’t.”