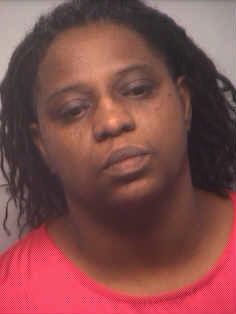 A woman who joined with her son to murder her former girlfriend was convicted a second time on Friday, landing a sentence of life plus 10 years for the brutal stabbing death. It was the second time a Fulton County jury convicted Tonya Miller, 48, for the 2005 murder of Cheryl Miranda, 56. In 2011, the Georgia Supreme Court ordered a new trial for Miller but upheld the conviction of Miller's son, Jabaris Miller. The women had a stormy relationship and Miranda twice sought protective orders to keep Miller (photo) away from her. In the petitions for the protective orders, Miranda’s sworn allegations claimed that her former girlfriend “threatens to kill me, threatens to stab me, beat me, [and] I’m in fear, great fear of my life.” Prosecutors said in 2008 that Jabaris Miller, then 22, felt neglected by his mother because of the relationship. But when Miranda dumped Miller, the mother and son hatched a plan to kill her. "In a twisted kind of way, the murder brought them together," Fulton prosecutor Clint Rucker said at the time. In early 2005, Miranda agreed to give Miller and her son a ride from their one-time home in Tampa to Georgia before she continued on to start a new life in Alabama, according to a summary of the case from the Georgia Supreme Court. But on March 4, police found Miranda’s torched Nissan truck near a park in Fulton County. From a summary of the case:

[Miranda] had been stabbed, beaten, bound with a rope and strangled, then set on fire with charcoal lighter fluid in what prosecutors called “overkill.” Investigators found that 33 calls had been made on Miranda’s mobile phone to the Millers’ family members and friends after Miranda disappeared. Cell phone towers helped track the phone’s path from Tampa to Atlanta. After he was arrested, Jabaris Miller told police he had driven the truck and body to a secluded area and set it on fire. However, he claimed he was simply borrowing the truck and did not initially notice there was a body in it. By the time he did, he was frightened to tell police. At trial, his attorney said that while Jabaris might be guilty of arson and concealing a death, the State had failed to prove who killed Miranda or where. Tonya Miller was arrested several days later at a relative’s home. Police seized an ornamental knife and nunchucks from her bag, which forensic evidence showed could have been used in the murder. In a joint trial, the Millers were convicted in February 2008 of murder, aggravated assault and concealing the death of another. In addition, Jabaris was convicted of arson. She was sentenced to life plus 10 years in prison; he was sentenced to life plus 20. Both then appealed to the state Supreme Court.