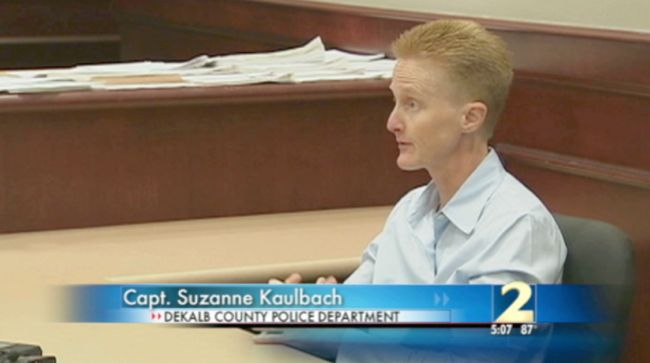 A lesbian former DeKalb police commander was indicted for receiving an outdoorsy lesbian’s dream: a boat, two all terrain vehicles, fishing equipment and more. Trouble is, the booty was apparently stolen by her partner’s teenage son.

Suzanne Eleanor Kaulbach was jailed in July after a contentious court hearing in which she was accused of letting the stolen property collect at the Clayton County home she shared with partner, Misty Dawn Caudle. On Wednesday, a grand jury returned a 20-count indictment that names Kaulbach, Caudle, Evan Tyler Caudle and his friend Donavin Thomas O’Leary. The indictment says the women knew the items were stolen and tried to hide the thefts made from the yards and storage sheds of neighbors.

Kaulbach, through her attorney, denies any wrongdoing, according to the AJC.

Kaulbach’s attorney has said the 24-year police veteran thought her partner’s 17-year-old son had bought the items off the website Craigslist.

She and Misty Dawn Caudle are both charged with seven counts of theft by receiving and one count each of lying to a police detective, obstructing his investigation and altering the identification number on a 1999 Smokercraft johnboat.

You wouldn’t expect a police captain to take the “see no evil, hear no evil, speak no evil” approach. But apparently the motto “the family that steals together stays together” has more pull than a Japanese proverb with three monkeys. Maybe that’s why she got fired.