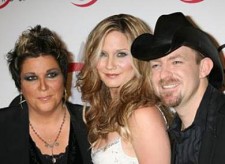 Before they were the darling duo of Country music, Sugarland was a trio comprised of popular Atlanta solo artists. A federal judge in Atlanta OK'd a settlement Friday that gives lesbian cofounder Kristen Hall a piece of the action. In the settlement that avoided a public trial, Hall (photo, left) received a check for an undisclosed amount in response to her $14 million lawsuit, according to the Associated Press. A trial over the lawsuit was scheduled to open Monday. Hall founded the act with Kristian Bush (right) in 2002 and later added the golden vocals of Jennifer Nettles (center). All three artists were popular with gay and lesbian audiences as solo acts and as part of local ensembles. Just as the trio began to take off at the national level—but before Bush and Nettles became Country superstars—Hall left the band in 2005. The $14 million Hall sought in the suit represented more than a third of the profits of the now best-selling Country act. The suit filed in 2008 claimed Hall set the stage for the band’s success and was owed profits the band made before and since her departure, plus expenses charged on her personal credit card while the band was still up and coming. Nettles and Bush, not wanting the public stink of a trial, settled Friday. But they have said that they had no profit-sharing agreement with Hall, and that she left the band high and dry in 2005 with debts totaling $100,000. Sugarland was named the Country Music Association’s duo of the year last week.