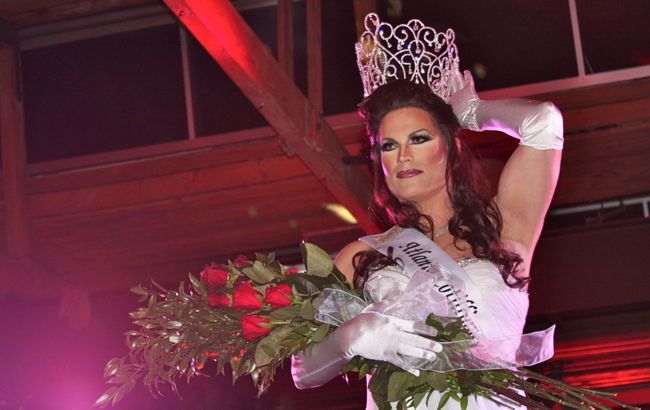 Jacqueline D’Bouvier VonSeco was crowned Atlanta Cotillion Queen on Saturday with a whopping $42,337 in her couture bodice, adding to this year’s record-breaking $161,507 donation to AID Atlanta. The 2011 debutantes (bottom photo) and most male guests donned glamour drag for the Atlanta Cotillion X Ball, and other male guests wore tuxes. Female guests in evening dresses and tuxes were also welcome. This year’s donation brings the 10-year tally of Cotillion donations to the HIV/AIDS agency to some $890,000.

The crowning of VonSeco (top photo), nee JD Kellum, solidifies what has become quite the VonSeco legacy for Cotillion. Predecessor Ava VonSeco (Joshua Bettis) took the crown in 2010, and Michel’le VonSeco (Michael Lammons) preceded them in 2009. The annual black-tie gala has become a staple in gay Atlanta, featuring the twist in which men who don’t normally do drag transform themselves to become debutantes for a night. This year’s class of six extraordinary gentlemen competed to become Queen based on which of them raised the most donations during a months-long fundraising season that began in April.

In addition to the debs’ efforts, the Cotillion board also hosts several fundraisers throughout the season to add to the final donation. This year saw the Cotillion Cabaret in August, an egg-themed Egg-stravaganza in May, the Mayday T-Dance and Cotillion’s fashionable season launch at Saks in April. Click the event names to view photo albums. The evening was hosted by Bert Weiss of Q100’s “The Bert Show” and featured a cocktail reception, a presentation of the debutantes with tuxedoed escorts, the crowning of this year’s Queen, an honors presentation and a dance reception. Photos by Sher Pruitt