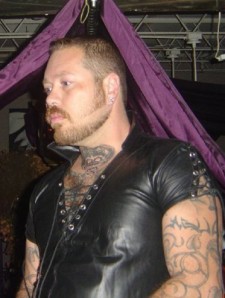 Depending on who you ask, transgender activists are up in arms or all about the first International Transgender Leather title being doled out during this weekend’s Leather Bash at the Atlanta Eagle.

Trans kink enthusiasts across the country have apparently been at odds since gay Leather Bash organizer Wayne Brawner (photo) announced in February that, in addition to the Mr. and Ms. Georgia Leather contests, he’s introducing the first transgender title. The full event schedule also includes social activities and vendors at the Eagle on Friday night and all day Saturday, and an “elders meeting” on Sunday.

So what’s all the hubbub about? Questions and critiques are flying over whether Brawner’s addition of the trans title is keeping transgender people from competing equally with bio men and women in their respective gender categories, or if it’s a tribute to transgender people’s specific place at the table. In an extended statement about the title on the Leather Bash website, Brawner argues that it’s the latter. He says the “International” distinction gives the title the weight it deserves, even though there are no local or national preliminary contests like other leather titles.

But Brawner’s own statements and decisions add to the heated debate and make the flap even more complicated, according to an Examiner report.

The selection of judges for this first ever International Transgender Leather title has also been questioned. Of the five judges only one actually identifies as Transgender. The remaining four include a cisgender man and cisgender woman couple, a cisgender woman who is reputed to be a collector of FTM boytoys and a genderfluid female “which in her case means lesbian who crossdresses part-time and likes to mess with people’s perception of male and female” according to a handful of Transgender community members.

Confusing and inflaming the critics even more? Two contestants – one FTM and the other MTF — will compete against each other for the title on Saturday, and others claim to be disqualified.

Judges and owner have stated there are only two contestants running for the non-gendered Transgender title as of September 10th (application closing was September 5th), a Trans manfrom Florida and a Trans woman from Louisiana. However, there were several more prospects that were prevented from running at all, a secretive decision made by Brawner without the judges’ knowledge.

It is confirmed that three post-transition Knoxville residents applied to be contestants to make the point “we are Leather and community leaders just like everyone else” except their applications were returned unopened and Brawner has not replied to their emails asking why. When approached by Examiner reporter for comment on this issue Brawner again made threats of legal action then shut down communications.

Messy. But if you decide to attend for the controversy or in spite of it, Leather Bash offers a packed event schedule following a busy year of signature Eagle fetish weekends and title contests, from Atlanta Leather Pride and Southeast Black & Blue Weekend to Atlanta Bear Fest.