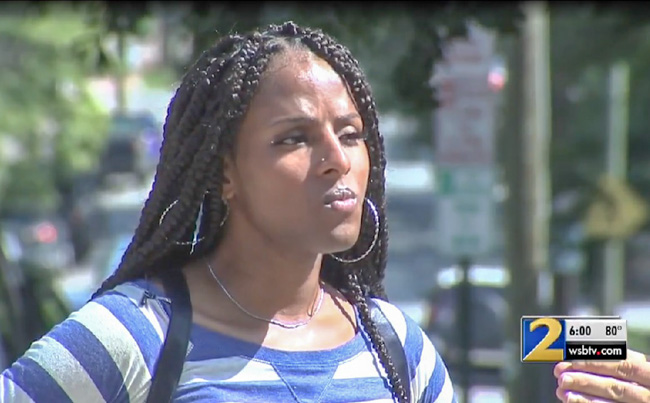 A transgender woman spent five months in the Fulton County Jail on trumped-up charges of cocaine trafficking, according to a federal lawsuit against the arresting officers.

Ju’Zema Goldring’s attorney Zack Greenamyre said officers bungled the test they did on the contents of a stress ball Golding was carrying when she was stopped by police and arrested her anyway.

“Ms. Goldring’s incarceration lasted as long as it did because of the false drug charge, which was only supported by an inaccurate and incorrectly performed drug test,” he said in a statement.

A lawsuit was filed in U.S. District Court against Atlanta Police Officers Vladimir Henry and Juan Restropo in March 2018. An assistant city attorney for the City of Atlanta is representing the officers.

Goldring (photo) was stopped for allegedly jaywalking in October 2015. Police cut open a stress ball she was carrying and found a white substance inside, then charged her with jaywalking. The officers performed a field test on the substance and Henry interpreted the results as positive for drugs and charged her with felony cocaine trafficking.

In November 2015, the GBI Forensic Laboratory tested the substance and concluded it was not cocaine or any other controlled substance. But the charges weren’t dropped and Goldring wasn’t released until March 2016 — five months after her arrest and four months since the GBI said no drugs were found.

Goldring said she was placed in solitary confinement and was assaulted in jail, “leaving a permanent scar,” according to the lawsuit.

Goldring sued for malicious prosecution and is seeking compensatory and punitive damages as well as attorney’s fees.

Assistant city attorney Staci Miller filed a motion for summary judgment in June. She claimed the field test was performed correctly and that the officers are entitled to qualified immunity, which provides “complete protection” for the officers from being sued in their individual capacities, according to the lawsuit. She also claimed that the search of Goldring didn’t violate any laws and that officers had probable cause to charge her with drug trafficking based on the allegedly positive drug test.

Greenamyre filed a response to the motion on Friday. He said the officers omitted evidence of the field drug test showing the negative results. He also claimed Henry performed the test wrong and misread the results.

“The city’s arguments are alarming,” Greenamyre said in the statement.

The officers treated Goldring differently because she is transgender, according to Jeffrey Filipovits, another of Goldring’s attorneys.

“This incident captures the risks trans people undertake simply existing in the world,” Filipovits said in a statement. “We would hope that the city would recognize that its officer’s blatant incompetence, and rectify it. Instead, the city argues that Ms. Goldring’s treatment was wholly appropriate. That should concern all of us.”

A city spokesperson told WSB-TV the city is committed to “to ensuring dignity and justice for the transgender community.”

However, we do contest the version of the facts contained in [Goldring's attorneys'] press release and would ask the public to wait on the Court's determination in this matter.

Atlanta police pledged to reform their approach to trans people in 2014. But homophobic, anti-trans training material used by police was uncovered in 2015. The city apologized for the incident. A trans activist was named to the city’s police review board in 2016. Police Chief Erika Shields, who came out in 2017, pledged to work more on LGBTQ issues when she took over as chief in 2016.