Last Splash: Mary’s crew dresses up to say so long to summer 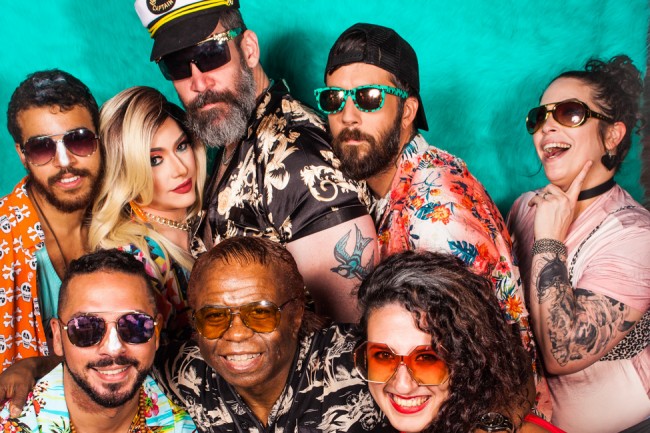 For scores of queers for scores of years, Labor Day means your last chance for a beach trip, pool run or tropical-color-sunglasses-floatie- shorts-pineapple-swimwear-don’t-care look.

In celebration of summer’s last splash, the crew from Mary’s put on their interpretations of the holiday weekend, and local photographer Jon Dean captured the magic. Great pics and fun fam make for one of Dean's best Q contriubtions yet, and who better to bid the season so-long than the people who kick off summer with just as much fanfare?

While the bar polishes plans for Labor Day Weekend installments of their most popular parties and a celebration of Matt Jones' life on Friday, Q magazine shows off the photo essay and talks to the owners and staff about 20 years of the little rock-n-roll queer bar that could. After all, they were once voted among the best gay bars in the world.

What to expect at Mary’s:

A bunch of silliness. In a good way. We dance and sing and pop comically large fans. We're a laid-back crew, and our regulars really groove on that vibe. And I'm usually shirtless. I can't dance, but I do know the Napoleon Dynamite talent show dance. Takes people to that 2004 place.

Get drunk and hopefully leave with some of your dignity.

His other favorite EAV spots:

Flatiron, The Earl, The Basement

On the Mary’s Glitz and other drag shows:

Mary’s sets a standard for high concept drag. Our looks are paired with a story that conveys something.

During the finale of Miss Glitz, I “vomited” fake film grade blood into the audience and promptly ruined a girl’s Anthropologie sweater. She called the health department who contacted Mary’s the next day. Needless to say I was proud. She was wearing Anthropologie, though, so I say she might have had it coming.

What to expect at Mary’s:

The beautiful thing about Mary’s is you never know what to expect, and you usually don’t get the expected.

Come here to meet and see a lot of creatively diverse and talented people.

The first Halloween season after I started, I got to come to work dressed like a slasher for our Slumber Party Massacre. It was the first time I ever got to do something like that with a job, and it’s still probably the most fun I’ve ever had at work.

The night when paramedics showed up and brought a stretcher up the stairs in the middle of a drag show. Best part: They were at the wrong bar.

You can usually expect to find yourself lost in good conversation with friends or a random stranger, maybe discover a new favorite song from one our DJs and more than likely find yourself with a doozy of a hangover if the night goes right.

Customers go-go dancing on the bar for charity, a guy in a jock dancing to “Fuck tha Police” by NWA… Another special night was when Obama got elected in 2008, and the entire village turned into a party. Grown men were joyfully weeping, girls were dancing topless. It felt like a scene from a 1920s movie with champagne and flappers.

I have worked at Mary's for 19 years.  Our customers can expect lots of humor and good music.

When Shirley Franklin, before becoming mayor of Atlanta, came in and tried to sing.  She had a realistic sense of humor about her voice.

All photos by Jon Dean. Mary’s is at 1287 Glenwood Ave SE, on Facebook, Instagram and at marysatlanta.com.

This feature originally ran in Q magazine. Read the full issue below, and pick up a new edition each Thursday.