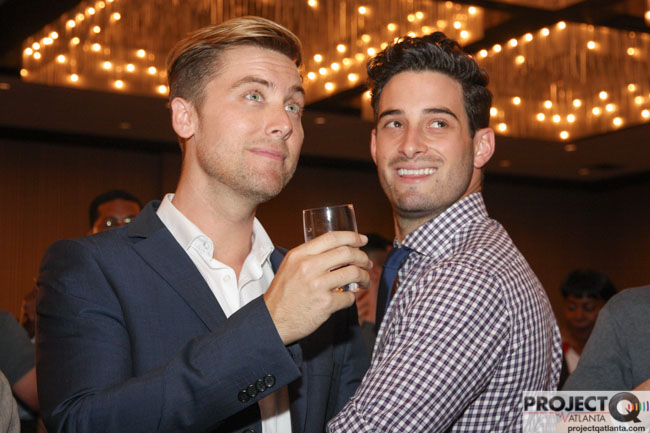 The effort, the launch of an 11-city tour by Freedom to Marry and SKYY Vodka, hopes to help bring gay marriage to Georgia and other states that still ban it. The group of supporters, led by Bass and fiancé Michael Turchin, also wanted to set a new world record for the largest arms-linked toast. So the event was recorded and audited in hopes of scoring that Guinness World Record.

"We are just trying to increase the visibility of the message that love should be equal throughout anyone's life," Bass says in the video below. "It's time for the South to open up their minds."

Bass, along with Atlanta Mayor Kasim Reed, is a co-chair of Southerners for the Freedom to Marry, a $1 million national campaign to bring same-sex marriage to Southern states that launched in Atlanta in February.

Bass and Turchin also teased their own upcoming wedding, set for Los Angeles in February. But the couple says the planning is a work in progress.

"It's going to be a very magical wedding," Bass says.

The event on Tuesday at the W Atlanta Midtown also included Royale, a "RuPaul's Drag Race" competitor on Season Four who made her second trip to Atlanta in a matter of a few days. She performed last week at Burkhart's. 11Alive diva Evelyn Mims emceed the event.