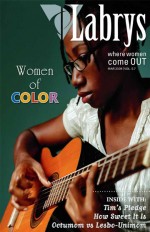 Just a month after its fifth anniversary, Labrys — an Atlanta-based publication for lesbians — announced the end of its monthly print publication, though it’s unveiling a redesigned and more robust website.

The shuttering of the publication is another sign of the souring environment for LGBT print publications across the country, an atmosphere that has brought historic lows in page counts for Southern Voice and David Atlanta and the recent shuttering of the New York Blade and Genre.

Labrys Publisher Maria Rivers announced the end of the print publication in a letter to readers.

The time has come for change. We must take a bow from print media and move forward with our progression. We have the respect and the means to close our magazine chapter with grace and embrace our new and improved media with as much applause as we deserve. This is a good thing. With every ending comes a new beginning. This new beginning starts with a BANG as our new interactive website takes us all to infinite possibilities.

Rivers says a new interactive Labrys website will become a “hub for meeting and sharing.”

We will continue to flourish and carry on the Labrys name. Through labrysatl.com you will stay connected with each other, meet new women in our community, and share adventures. We have created a remarkable thing as we have bonded and built Atlanta’s longest running gay women’s publication. We will be remembered.

The economic recession has sharply reduced advertising in publications across the country. That, in turn, has caused page counts to drop and revenue to plummet.

The Advocate has reduced its frequency, Genre closed earlier this year and the New York Blade last week announced it was ceasing publication. Gay media companies PlanetOut and Here Networks have merged and Window Media, which publishes SoVo and David, among others, is stumbling and has been shopped to potential buyers in recent weeks.

Window isn’t helped by sitting in federal receivership and an executive-level shakeup that continued last week with the resignation of David Unger, who owns the equity fund that is a majority owner in the gay media company.