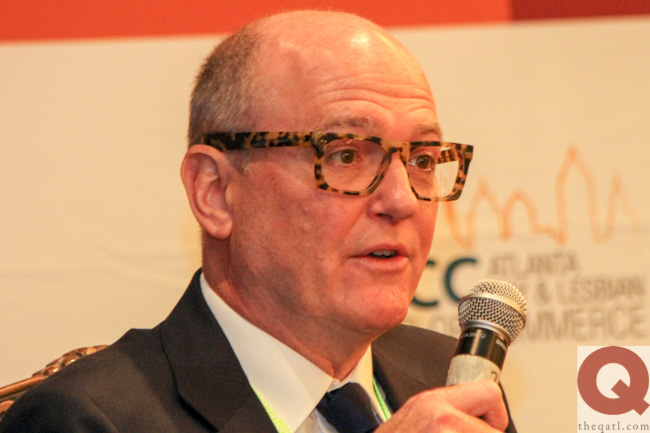 Richard Keatley wants to be “the voice for the working people” of Georgia, and he considers LGBTQ people a vital part of the state’s economic engine.

“I’ve seen in my lifetime how society has changed for the better for the LGBT community and the immense contribution that they make to the business community, and the diversity and the ideas,” Keatley told Project Q Atlanta. “People that are able to live their identity are much more productive members of society.”

Keatley faces incumbent Republican Mark Butler in the race for labor commissioner in November. The Democrat gained the endorsements of Georgia Equality and Georgia Stonewall Democrats, who hosted a joint fundraiser for him on Thursday.

As to why he’s running, Keatley cited Economic Policy Institute studies that rank the state number 42 in economic opportunity.

“We’re on par with Alabama and we’re much more wealthy than Alabama,” he said. “We should not be sitting at the same level as some of the other southern states because we’re a big economic hub with a lot of money.”

“We do a really good job at inviting businesses here and giving them a really big tax cut and then just letting the cards just fall where they may, and end up usually hiring people from other states to fill those good-paying jobs,” he added.

Keatley also said that as labor commissioner he will form inclusive advisory boards that will act as a sort of task force.

“I would be very proactive in putting people on my advisory boards and councils that are reflective of the diversity that we have in this state,” he said. “That includes sexual orientation, gender identity, all of the LGBT issues.”

The job of labor commissioner is an executive position, and therefore he would not responsible for making policy. Instead, his office would provide the data that helps lawmakers shape those policies. But he strongly opposes anti-LGBTQ policies, as he showed at an LGBTQ business summit hosted by the Atlanta Gay & Lesbian Chamber of Commerce in June.

“It’s a marketing ploy to call something bad with a name that sounds good,” he said. “Everybody likes liberty and the freedom of religion is a foundation of the United States Constitution, so I believe everyone should have the freedom to practice their religion freely. These laws have nothing to do with this.”

“They’re proposing to rehash an issue that we dealt with in the 1960s, which is that a public enterprise such as a restaurant has an obligation to treat people with the respect of the civil rights that they have earned,” he added.