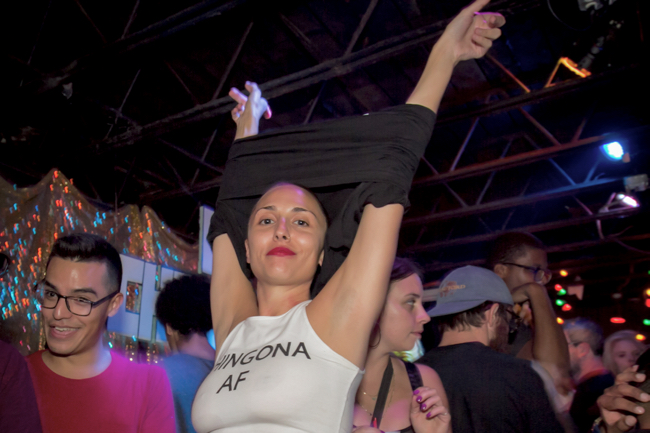 It’s safe to say that La Choloteca was the fastest growing party of 2017. The fun and festivity they are known for is the magical glue that draws a truly mixed crowd, packing out the house with an array of social circles from vastly different age, gender identity, orientation, race, backgrounds and interests. The magic is set to happen next on Sunday.

But La Choloteca’s residency at Star Bar in L5P was not expected to be as massive back at its start in September 2016. When attendance grew like wildfire, it was obvious the multiplying crowds would require a larger venue. Now it’s held every third Thursday at Ponce De Leon’s MJQ, and now at Sun In My Belly for New Year’s Eve.

Providing a meeting ground for Latinx creatives, the founders intentionally created a space for their cultures and tastes. Spinning everything from cumbia, salsa, reggaeton and electro Spanish pop, the musical foundation alone stands out from any other party unit in the ATL perimeter, an aspect that is personally liberating for those involved.

“I was feeling like there was a lack of representation in music, especially within the queer community,” Kenneth Figueraoa explains. “I would find myself at different parties with the same music always playing. While I find value in that music, it can be pretty mind-numbing.

“Sometimes it would feel like a burden or even embarrassing to request the kind of music I wanted to hear,” he adds. “There’s a ton of modern electronic music coming from Central and South America that I feel needs an Atlanta audience. We are a diverse crowd which should definitely reflect in the music we hear in our sanctuaries.”

La Choloteca’s popularity is less an oddity and more proof of how people of color have remained leaders of underground nightlife. With a focus on decolonization, both in club culture and dialogue, Georgia has one of the fastest growing Hispanic populations in the country, yet representation and spaces have been tremendously lacking inside the city perimeter.

The crowd attending La Choloteca may be a coterie, but family first is the foundation of their magnetic fete.

“We definitely want to have more influence in our community and the arts world,” he says. “I love having a traveling aspect to the party and hope to do more of that in the New Year. We're also in the works to create other spin-off evenings that would be more themed to specific genres that may not always find its way into a Cholo mix.

“For me personally, that is also creating more queer spaces.”