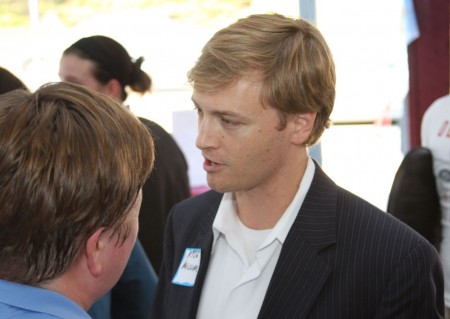 Kyle Williams, who is seeking a seat on the Decatur City Commission, appeared at the 4th Friday event from the Atlanta Gay & Lesbian Chamber of Commerce on June 26.

Kyle Williams, a gay attorney campaigning for a seat on the Decatur City Commission, can chalk up three key endorsements for his race.

On Tuesday, the campaign announced that two gay-friendly state lawmakers — Reps. Stephanie Stuckey Benfield and Stacey Abrams — backed his candidacy. That’s in addition to the recent endorsement of Williams by the Gay & Lesbian Victory Fund, a nod that can mean exposure and fundraising by politically attuned LGBT supporters from across the country.

Benfield and Abrams praised Williams for his work and experience in Decatur issues.

“Kyle has the range of experience Decatur requires,” Abrams says in a statement from the campaign. “His experience on the Decatur Zoning Board of Appeals and as an attorney will be put to good use on the City Commission. As an active, engaged citizen, he has built strong relationships on the state level that will serve the City of Decatur well. Kyle has my full support for his campaign.”

Benfield says she will work for Williams’ campaign.

“I know his commitment to South Decatur,” Benfield says in a press release. “As a mother, I appreciate his work to improve early childhood learning in Decatur. I am proud to give Kyle my full support for his campaign. Kyle will make a great City Commissioner and will fight hard for us. I will work to elect Kyle this fall.”

Williams spent the weekend making appearances at several gay events, including 4th Friday from the Atlanta Gay & Lesbian Chamber of Commerce and Georgia Equality’s Evening for Equality on Saturday. He says he is “honored” to receive the endorsements from the state lawmakers.

“They are great representatives for South Decatur and are never afraid to speak up for us in the Georgia General Assembly,” Williams says in a prepared statement. “I’m glad to have their support and look forward to working with them in this campaign and for South Decatur.”

Williams announced his campaign for the District 2 post on April 23, hoping to become the second openly gay member of the commission. Kecia Cunningham was first elected to the commission in 1999; her current term expires in 2011. He recently launched a web site, complete with a campaign video and the ability to accept online donations.