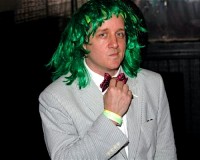 Oh, that rabble-rousing citizen provocateur and gay former candidate for Atlanta Mayor! On the latest much-watch webisode of Kyle.tv, Kyle Keyser whisks off our favorite fruit fly to wreak havoc at Steeplechase before bailing to Wig Out with the queers.

Cho, in town for Jane Fonda’s fitness fandango at the Georgia Dome, needed some gay while in town. She knew just who to contact. Our boy knew that Richard Simmons, the Pointer Sisters and Debbie Allen over at the Fonda event weren’t the kind of gay the comedian had in mind.

In the video below, some of our favorite moments are at Steeplechase, Atlanta’s hoity-toity horse racing event that is so not “My Fair Lady” and so clearly benefited from the presence of people with personalities.

Upon arrival, Cho and Keyser—he in the appropriate seersucker suit—dive bomb the bar for cocktails then set about finding someone to tie his bowtie, asking random strangers for help. That crisis resolved, he spots Kandi Burruss shooting an episode for “Real Housewives.” Attitude from Bravo production assistant ensues.

It’s rainy, and they’re bored, so after Cho calls Steeplechase “The White Freaknik,” they’re off to Wig Out (photos) to help raise funds for the MondoHomo Dirty South festival at the Eagle. There, they cavorted with drag queens, alterna-queers and a distinct over-abundance of wigs. Keyser was in his element.

“If the Southern bourgeoisie want to organize a real party, I’ve got a couple people I could introduce them to,” he says.

Now we know where he honed his chops for the edgy mayoral campaign videos he ran.

Enjoy the webisode below, and check out more webisodes of Keyser’s hilarity and antics on Kyle.tv.

If you haven’t heard of kyle.tv yet then don’t worry. Keep watching. You WILL!