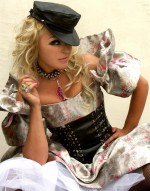 The fall event season is getting more interesting.

On Tuesday, the Atlanta Pride Committee announced details of Opening Night for the former fun festival of summer that is now relegated to late October.

And Thursday, the folks putting together the Big Gay Out at Six Flags — officially known as the resurrected Pearl Day — announced that Kristine W. and Kelly Rowland are among the performers in place for the Sept. 11 event.

The event, set to run 6 p.m. to midnight, offers “Noah’s Arc” crooner Niki Jane, Kristine W. and former Destiny’s Child Kelly Rowland on one stage, with “American Idol” favs Syesha Mercado, Paris Bennett and Frenchie Davis on the other. The Peachtree Pavilion will offer the tunes of DJ Power Infiniti and Junior Vasquez. Drag performances are scheduled for the Crystal Pistol.

The entertainment lineup comes several weeks after Pearl Day organizers said they would release the details during a kickoff event in late May. That never materialized and a disagreement surfaced over who would be booking talent for the event — Six Flags or MTV and Logo, as Pearl Day organizers had said.

Pearl Day named Atlanta Pride as a beneficiary for the event this year, with the group set to receive $5,000. The donation could reach $15,000 if attendance surpasses 15,000 people.