King Center loses one of its gay marriage bigots 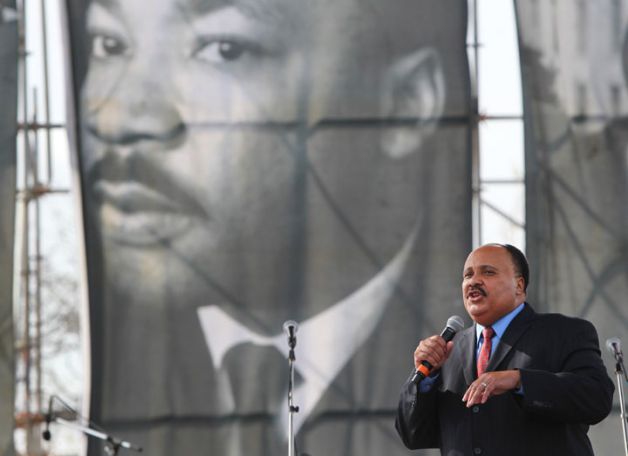 There appears to be room for only one gay marriage opponent at the helm of Atlanta’s King Center. A week after Bernice King was named CEO, her brother is out as president.

So much for all of the warm fuzzies that accompanied Bernice King’s appointment last week, touting that MLK’s often squabbling siblings would now work hand-in-hand to manage the center that promotes and preserves MLK’s legacy.

The appointment of Bernice King as CEO diminished MLK III’s dual role of president and CEO. So MLK III (photo) announced his resignation on Tuesday, a day after the federal holiday commemorating his father’s birthday. He’s off to launch some new social justice effort.

Bernice King’s ascension to lead the center came with her considerable anti-gay baggage and threw some cold water on the LGBT celebration of the MLK holiday. She walked hand-in-hand with anti-gay Bishop Eddie Long — the megadaddy who likes his men dirty and his gay sex shenanigans with younger guys — in a 2004 march supporting a proposed state ban on same-sex marriage and saying her father “did not take a bullet for same-sex marriage.” MLK III shares his sister’s views, joining her in the march and offering that “I don’t think that marriage needs to redefined.”

That King’s siblings are against same-sex marriage stands in sharp contrast to that of their mother, Coretta Scott King, who supported HIV/AIDS fundraisers and awareness campaigns and came out in favor of gay marriage in 2005. She also spoke to the National Gay & Lesbian Task Force’s Creating Change conference in 2000, which was held in Atlanta, urging civil rights leaders to “make room at the table” for gay people.

MLK didn’t speak about gay equality before his assassination in 1968. But his special assistant, Bayard Rustin, was openly gay and helped King plan the March on Washington. Rustin’s role in the civil rights movements was celebrated on Monday at the 11th Annual Bayard Rustin/Audre Lorde Breakfast with more than 250 LGBT activists and gay-friendly allies.

Despite her opposition to gay marriage, Bernice King did throw a bone to LGBT activists on Monday when she mentioned the gays in her speech at the MLK March & Rally. With one same-sex marriage opponent out at the King Center, maybe the other is beginning to go soft.