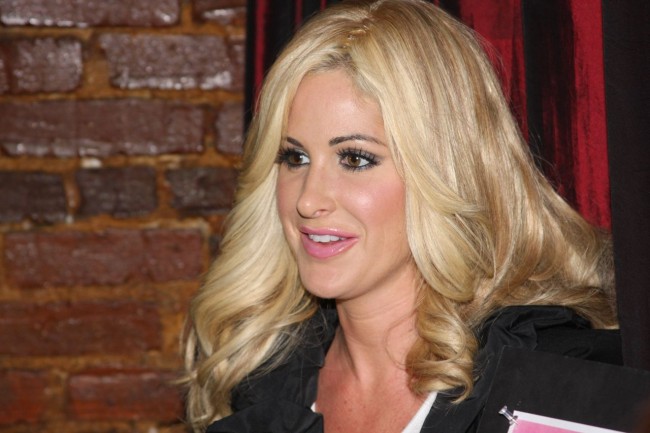 We have a love-hate relationship with Kim Zolciak and her on-again, off-again gay publicist Jonathan Jaxson. We love it when they get into a cat fight and hate it when they act like reasonable adults.

Zolciak, the token blond bombshell in Bravo’s “Real Housewives of Atlanta,” took to the airwaves on Wednesday to swat down a National Enquirer story that she dumped her married boyfriend following a fight at the gay-popular One Midtown Kitchen.

Funny enough, the story claims Zolciak dumped Big Poppa for cheating on her when Zolciak is already the one cheating on Big Poppa’s current wife.

“I’ve never even been to that restaurant in my life,” Zolciak told Q100. “I wasn’t even in Atlanta on Sept. 12. I was [in California]. I flew back to Atlanta very late on the 12th. I still have my plane ticket.”

Zolciak also batted down the stories about Najjar beating down her door and the attempt to reclaim the luxury auto.

“He doesn’t need to bang on the door. He just walks in with his key. . .The Bentley is in my name.”

All this comes as the show enters the home stretch of its second season, with ratings starting to tumble. (Thursday at 10 p.m. Comcast channel 70)

Coincidence? Maybe. But then again, wherever Zolciak goes, drama soon follows. She blames the National Enquirer piece on Jaxson, who seems to get as much attention for Zolciak as he does for himself. And isn’t that the point?

During the phone call, Zolciak also hinted the Enquirer story was planted by her on-again, off-again publicist Jonathan Jaxson.

Said Zolciak: “Nobody else could make up something of that caliber.”

The two had a very public split last month — their second this year — and Jaxson called Zolciak “a habitual liar.” Jaxson then goes on to stretch the truth himself during a radio interview. All that came just a few weeks after the pair enjoyed a packed night at Blake’s to promote her single, “Tardy for the Party.”

The song, by the way, is faltering. Surprised? Download sales are slow and it’s receiving little radio airplay.