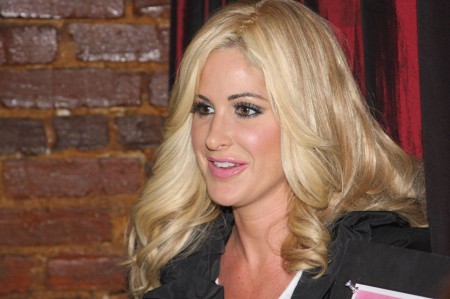 When she and an entourage hit the popular Midtown gay bar Blake’s on Wednesday, the gays were packed in tight. Drama ensued.

Zolciak, the wig-wearing, wannabe singer from “The Real Housewives of Atlanta,” enjoys a gay fanbase that rivals that of NeNe Leakes, who stopped a few doors down at Outwrite earlier this month to pitch her new book. But last night was all about Zolciak and her new dance single, “Tardy for the Party.”

When Zolciak arrived — tardy, of course — the bar was already packed. She was shoehorned into a corner and her entourage, led by gay publicist Jonathan Jaxson, tried to make some room with the help of drag personality Alexandria Martin. The gays kept pushing closer, making it clear that the bar and Zolciak’s handlers were ill-prepared for the enthusiastic response.

A bit of chaos continued as Jaxson’s crew– they were all dressed in black “Tardy for the Party” t-shirts — tried to manage the crowd. One member of the entourage pushed a photographer for Project Q Atlanta. When our staffer took offense, the crew member quipped back, “I’ll fuck you up” and attempted to push a second time. That’s not quite the way a celebrity — even a D-list one like Zolciak — wants her handlers interacting with the press.

But that’s what you can expect with a boss like Jaxson, who sued Zolciak earlier this year in a very public spat. Apparently, they’ve reconciled.

Jaxson (photo center), though, continues the same behaviors that earned him the title “Fame-Seeking Leech” from David magazine and a cover story headlined, “Who the hell is Jonathan Jaxson?” “World’s worst publicist?” That’s Jaxson, too.

After the event, Jaxson got around to reading our snarky preview of Zolciak’s appearance. He wasn’t pleased and directed this tweet to Project Q founder Matt Hennie:

@ProjectQAtlanta you guys tweet such a nice thing about my client and yet you are the biggest ASS HOLE MATT! Your articles r disgusting. F U

via FUCK OFF PROJECT Q what ever the fuck you are.

But his second profane tweet includes a link to our story and we appreciate the traffic it’s generated.