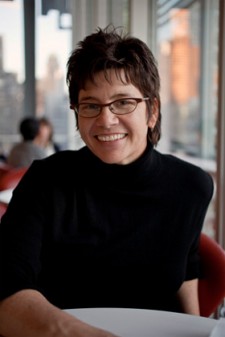 As she heads to Outwrite with her memoir, foodie and New York Times Atlanta Bureau Chief Kim Severson offers us food for thought on cooking, her frank memoir and ruffling Chick-fil-A’s feathers.

Severson’s bestselling “Spoon Fed: How Eight Cooks Saved My Life” is a candid look at her recovery from alcohol addiction with a little help from some famous friends. In a natural evolution, what started as a way to write about lessons learned from female cooking gurus who Severson met as a food writer quickly became a tell-all, the writer says.

“Each one of these women’s stories spoke to me in a special way that was very personal to me,” says Severson (photo). “If you’re going to talk about teaching life lessons, you have to talk about the ways it affects you personally, and then suddenly the whole sweater unravels. It would have been insincere not to be totally upfront. The best stories are true stories.”

To celebrate the paperback release of the book, Severson plans to let it all hang out again for fans at a reading and signing at Outwrite on Thursday. She’ll open up about a recovery that took her from the verge of losing her job as a reporter, her relationship, and possibly her life to becoming a food critic for the San Francisco Chronicle, then the Times.

If readers take away nothing else from “Spoon Fed,” Severson breaks it down for us: “Be yourself, tell the truth, and cook,” she says.

The openly gay author says that, besides the inspiration she received from the women in her book, food and the culture of food played a crucial role in her epiphany. It plays a role in your world, too.

“When you share a meal with somebody and have that communion across the table with somebody, there’s nothing more personal,” Severson says. “It gets down to the core of who we are. There’s no stronger connection than breaking bread together. When you eat something delicious, it wakes up your senses, and something interesting happens that allows the conversation to just flow.”

And it doesn’t have to be all fancy gourmet fabulousness, either.

“Especially in the gay community, we know as much or more than anybody that whether it’s a good potluck or fabulous dinner party, sitting down and eating together builds community,” Severson says.

Speaking of the gays, Severson returned to our radar when religious conservatives jumped all over her New York Times piece on Chick-fil-A‘s most recent flap over its anti-gay ties. Pundits criticized Severson repeating the colloquialism “Jesus chicken” and said that, as a lesbian, she was therefore biased in her report.

“I thought it was really a balanced story about the pros and cons and the controversy,” Severson says. “I really didn’t even think my sexual orientation had anything to do with the story. If gay is an issue, then white men shouldn’t be able to cover the Senate. So I just did my job.

“I was surprised that people chose to hone in on that, but I’ve been attacked by worse,” she continues. “I’m still getting a few angry hateful e-mails, but it’s nothing compared to the crap reporters get who cover Israel or Iraq and Afghanistan. It comes with the territory.”

“I didn’t make it up,” she says. “People have shorthanded it in reference to Chick-fil-A, and that’s worth reporting. I love ‘Jesus chicken’ as a phrase. I think it’s hilarious. I would put that in the story again.”

All in a days work, but for Severson, the real meat of the story comes back to food. She says that the preponderance of reality TV around cooking—the competitive nature of the shows and the formal restaurant hype—will swing back toward “a connection between people and what they eat, not that ‘fancy cheffy-cheffy’ but a change back to the simpler, more tangible parts of eating, back to just simple and delicious.”

Novice cooks can start simple, learn fast and make a real difference in their lives, the writer asserts, citing her own routine as an example. Severson gets more ambitious on the weekends and is “trying to get into the bread thing next,” but weekday basics aren’t difficult and are rewarding, she says.

“My partner and I have a 3-year-old, and we try to sit down at the table every night,” she says. “Start with one thing you like to eat. You can throw together a very fresh salad and a braised pork, a roast chicken… A slow long heat on an inexpensive piece of meat can be pretty magical, and you’ll feel like you’ve really accomplished something.

“Think about how often you spend a half hour looking at bad TV or scrolling through Perez Hilton,” she adds. “In that time, you could create something really special.”