‘Kids Are All Right’ scores one for gay parents 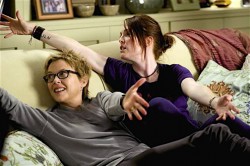 In a summer of underwhelming blockbusters and little for gay audiences to rally behind, the lesbian-themed “The Kids Are All Right” is more than alright – it’s warm, funny and timely. The film opens in Atlanta on Friday.

In Lisa Cholodenko’s new comedy, Annette Bening and Julianne Moore (top photo, l-r) star as a long-term lesbian couple. Nic (Bening) is a doctor, while Jules (Moore) is at a professional crossroads, seemingly unable to decide what she wants. Her current gig is landscaping.

Nic and Jules are raising their two children Laser (Josh Hutcherson) and Joni (Mia Wasikowska, from Tim Burton’s “Alice in Wonderland”). Each woman was impregnated courtesy of the same sperm donor. Before Joni goes off to college, she decides to look up the chap who provided said sperm for her and Laser. 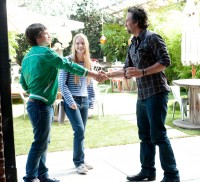 The donor turns out to be Paul (Mark Ruffalo), an affable type who owns a restaurant and is jazzed to meet his spawn. Eventually, Paul lands an invitation to come meet the whole family. Nic and Jules are not crazy about the idea, especially Nic.

“The Kids Are All Right” isn’t a film with some labyrinthine plot. It’s mostly about the characters and how the outsider Paul changes the others and their relationships. Eventually, Paul seduces everyone—one sexually, others emotionally.

As is her trademark, the director certainly knows how to get mileage out of her actors. Cholodenko got a career performance out of Ally Sheedy in her debut film “High Art” and made Frances McDormand even more of an icon in her follow up, “Laurel Canyon.” Heck, Cholodenko even made Kate Beckinsale three-dimensional in that film.

Bening’s Nic could be a sister to her “American Beauty” character Carolyn Burnham with her crusty, controlling side, yet the character also has a vulnerable quality. The actress get a masterful sequence where she visits Paul’s house with the rest of the family, drinks a little too much, tries a little too hard, and then makes a discovery she didn’t expect.

Moore is at her earthy best, funny and able to convey conflicting emotions at will. She’s really the emotional center of the film. For his part, Ruffalo is as charismatic as ever, sexy without even trying. It’s no wonder everyone flocks to him. Gay guys: the actor has never been shy about dropping trou and he continues that tradition here, mercifully.

Cholodenko–who also co-wrote the smart script with Stuart Blumberg—aces the dynamic between the two women. Nic and Jules aren’t some glamorized Hollywood version of a lesbian couple. They are two middle aged women who have built a life together and are working to keep it rolling. There are signs that some rust has crept into their relationship, but the bond seems like one that won’t easily snap.

“The Kids Are All Right” opens in Atlanta on Friday at the Regal Tara.